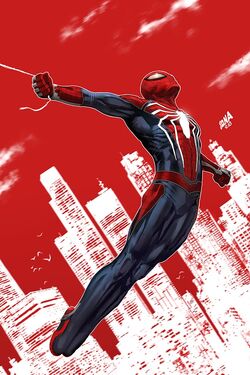 After his suit became damaged during a confrontation with Wilson Fisk, Spider-Man headed to Octavius industries to repair it. He was caught in the act by his boss, Otto Octavius. Pretending to misinterpret the situation as if Peter was merely Spider-Man's equipment designer and not Spider-Man himself, Otto took the liberty of improving over Peter's design.[1]

The Advanced Suit's design is based on athletic wear and compression clothing.[2] Peter has further improved the material design of his Advanced Suit, with each of the comprising colors on the outfit actually representing something specific in functionality.[2] The red part of the suit is made out of a reinforced and thicker material, providing Spider-Man some armor and protection, while the blue part adds flexibility.[2] The white bits, which are positioned on his gauntlets, feet, and chest, are carbon fiber, and designed to absorb as much impact as possible, thus offering the most protection.[2] The shoes have also been modernized, now featuring a sneaker-style design instead of knee-high boots.[2]

Additionally the suit is equipped with several technological expansions to increment its overall efficiency, having its own built-in camera, radio and communication systems. While wearing the costume, Spider-Man is also odor- and scent-free.[3] Furthermore, the lenses of the suit's mask are expressive and can squint inwards as well as outwards.

Retrieved from "https://marvel.fandom.com/wiki/Spider-Man%27s_Advanced_Suit?oldid=6082990"
Community content is available under CC-BY-SA unless otherwise noted.