Created as a gift for Miles to keep him safe

Made you something. Should keep you safe.

An upgraded version of Miles Morales's Spider-Man suit created by his uncle Aaron Davis in his underground lair. The suit was place in his locker with a frequency lock that can be unlocked by music formed by sounds Aaron tasked his nephew to collect throughout the city.

Much of the suit's design is based on the Prowler's own suit, having similar color scheme, gadgets, and equipment, but with the added spider theme.[1] 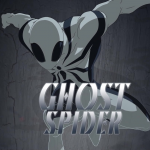