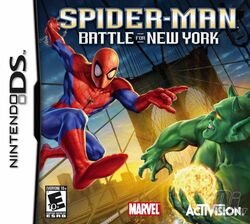 After finding out Spider-Man’s true identity and how he gained his super powers, Norman Osborn tries to recreate the process on himself, thinking that his superior knowledge and access to his ‘Oz Formula’ would generate even better results. His experiment leads to him becoming the Green Goblin. Considering the process to be a success, he begins to use his formula on other people, creating a goblin army. It’s now up to Spider-Man to figure out what’s going on and put a stop to the Goblin’s plans before he can take over New York City.

Like this? Let us know!
Retrieved from "https://marvel.fandom.com/wiki/Spider-Man:_Battle_for_New_York?oldid=6462123"
Community content is available under CC-BY-SA unless otherwise noted.