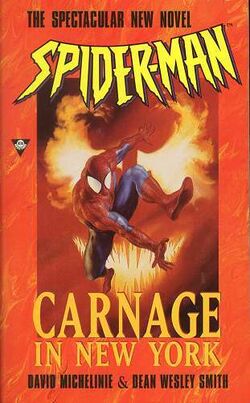 Dr. Eric Catrall flees carrying a briefcase containing a vial of "trigger" serum - a chemical compound that induces violent insanity in anyone exposed to even trace amounts. Pursued by a pair of FBI agents, he's cornered in an alley but is rescued by Spider-Man - who had been on his way home from attempting to spy on a local mobster.

Spider-Man returns home to his wife, Mary Jane, and tells her about his altercation with the feds. Their conversation is interrupted by the arrival of Aunt May, who tells Peter that she is three months behind on her payments for her house and that unless she makes the payment the following day it will be repossessed. Despite himself and MJ not being financially well-off themselves, Peter promises to help May any way he can, and agrees to accompany her to the bank.

At the supervillain prison known as the Vault, rookie Guardsman Craig Lynch taunts Cletus Kasady. The serial killer responds by unleashing his symbiote and transforming into Carnage, terrifying Lynch.

Going to the Daily Bugle Building to investigate Catrall the following day, Peter listens to J. Jonah Jameson and Robbie Robertson discuss the Bugle financing the "Feed 'Em All" event - an initiative to feed the homeless - about to take place in Central Park. On his way out, Ben Urich informs him that Cletus Kasady is being brought back to New York, where an experiment is going to be performed to separate him from his symbiote and kill it.

At a diner, Eric Catrall orders breakfast and overhears the news regarding Carnage, realizing the experiment could potentially render the trigger serum inert. He is cornered by the two FBI agents, but the owner of the diner confronts them with a shotgun and lets Eric flee.

As the Guardsmen fortify a derelict highschool in Brooklyn in order to prepare for the experiment, Spider-Man travels to the school in case Carnage manages to break free, feeling responsible for the monster's very existence due to having brought the Venom symbiote to Earth. As the experiment begins, Eric Catrall infiltrates the building by pretending to be one of the employees and then tosses the briefcase containing the trigger serum into the blast. This shorts out Carnage's containment unit and Spider-Man intervenes and fights Carnage before the Guardsmen open fire with their flamethrowers and sonic cannons. When the smoke clears, Carnage has escaped, and Eric Catrall is gone.

Catrall is eventually found by the police, having been intimidated by Carnage into revealing what the trigger serum is capable of. On the verge of a nervous breakdown, Catrall tells Spider-Man that he'd accidentally invented the trigger serum while working at the Lifestream Technologies tech firm, but after realizing the CIA intended to weaponize it he destroyed his notes and stole the only sample. Tearfully apologizes to Spider-Man, Catrall begs him to stop Carnage. Panicking about Carnage having escaped and being in possession of the trigger serum, Peter almost forgets his promise to help Aunt May, forcing Mary Jane to step in and cover for him. On the day of the Feed 'Em All, Carnage attacks a penthouse party just outside Central Park and slaughters several of the guests, declaring his intent to poison the food being served with the trigger serum. The gory aftermath is caught on one of the cameras filming the event. Seeing Carnage has Catrall's briefcase, Peter sets out to stop him.

Seeing the news coverage, Dr. Catrall - on the verge of a breakdown - attempts to escape police custody to stop Carnage and is fatally shot, dying peacefully as he decides to leave everything to Spider-Man. Spider-Man arrives in time to save one of the party guests from being thrown to his death, mocking Carnage about how poorly thought-out his plan is, since no-one would be stupid enough to eat food he'd openly tampered with. Carnage decides to massacre the assembled people the old fashioned way, attacking Spider-Man; but is defeated when Spider-Man electrocutes him, forcing the symbiote to recede into Cletus' body.

After Cletus is arrested and returned to the Vault, MJ commiserates with Peter over Dr. Catrall's death and Aunt May reveals she traded her wedding ring to pay off her debts. To prevent the trigger serum from falling into the wrong hands again, Spider-Man travels to Four Freedoms Plaza and turns it over to Mister Fantastic, who promises to find a way to safely dispose of it.

Retrieved from "https://marvel.fandom.com/wiki/Spider-Man:_Carnage_In_New_York_(novel)?oldid=5754434"
Community content is available under CC-BY-SA unless otherwise noted.