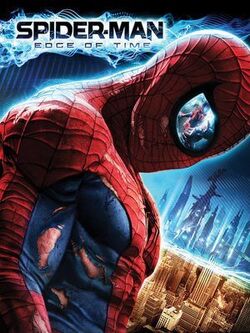 In the year 2099, Alchemax is in danger of being taken over by Stark-Fujikawa Industries. However, Walker Sloan, employee and scientist at Alchemax, has devised a plan to save the company. His plan is to travel to the past, launch Alchemax years before it was originally founded, form Alchemax in his own image, and dismantle Stark-Fujikawa Industries before it is even started. When Sloan launches his plan, Spider-Man 2099 arrives and jumps into the time portal in an attempt to stop Sloan from commencing with his plans, but he doesn't succeed.

Once Spider-Man 2099 returns back to 2099, he realizes that Nueva York has changed drastically. Spider-Man 2099 then uses Peter Parker's DNA in Alchemax's archives to create a chronal-link and contact him. He tries to warn Peter, who now worked for the genetics department of Alchemax, of his impending death. However, Peter did not listen to him, stating that he wasn't going to leave if innocent people were in danger. Spider-Man then goes up to the 66th floor of the Alchemax building, battles Anti-Venom, and is defeated. Spider-Man 2099 then uses the portal to retrieve Parker, and bring him back to the future, in an attempt to save his life.

As events unfold, Mary Jane Watson almost dies in the Alchemax building, but is saved by Spider-Man 2099. In the future, Spider-Man learns that he becomes the CEO of Alchemax. His future-self explains that he was able to live so long due to an anti-aging drug Alchemax had developed, and that he had began to seek power after the day he lost everyone he loved. As the CEO tries to explain more to his past-self, Spider-Man leaves to assist Spider-Man 2099 in stabilizing the portal.

After the Spider-Men defeated each others respective villain, the changes to made by Sloan's plot were reversed.

The game uses a "cause and effect" mechanism called Quantum Causality; the decisions Spider-Man makes effects Spider-Man 2099. For example, when Anti-Venom tried to kill Spider-Man with an elevator, the elevator Spider-Man 2099 was in turned into a closet.

Like this? Let us know!
Retrieved from "https://marvel.fandom.com/wiki/Spider-Man:_Edge_of_Time?oldid=6054167"
Community content is available under CC-BY-SA unless otherwise noted.