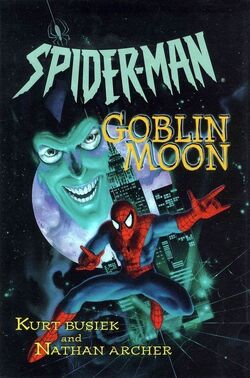 Norman Osborn holds a company party for Oscorp. He talks with his guests, including Howie Thurston, CEO of International Substrate, and Anne and Becky Aarons. Norman goes to the kitchens to ask Arthur Lewiston why his staff are not cleaning up the empty glasses, insisting that everything in the party has to be perfect. Norman goes outside to the terrace and looks up at the moon down to the pedestrians walking the sidewalks. Norman views them as insects, reasoning that only he knows how the world works, that there is always more to control in the world.

The Rat Pack invades the old IRT powerhouse on Eleventh Avenue. However, the police do not dare following them in case they have hostages. As members of the Rat Pack place satchel charges to damage the building's twelve turbines, Spider-Man crawls along the ceiling and makes his presence known by kicking a Rat Packer. The gang members in the room take out their guns and drop their satchels. Spidey dodges the bullets using his spider-sense and destroys the satchels. Four of the men don gas masks and throw canisters of tear gas at the masked vigilante. A Rat Packer hits Spidey with a taser, causing him to inhale some of the gas. The combined forces stop Spidey, and the Rat Pack make their escape by the Hudson River. Spidey realizes the Rat Pack has left behind a bomb and disposes it in the river before it explodes.

The next morning, Peter Parker discusses the Rat Pack situation with his wife, Mary Jane. They note that the Rat Pack only attacks on the full moon. A few hours later, Norman gives a speech at a speech at a Rotary luncheon in a hotel ballroom. He asks the people why the city has not done anything beyond sending in the police to stop the Rat Pack terrorists. Peter Parker arrives at work at the Daily Bugle and reporter Betty Brant asks him to help her cover the story of a homicide victim as a photographer. They find the murder victim is the high-ranking city official, Paul Charenton. Peter begins to suspect the Rat Pack could behind this, too.

Mayor Hizzoner asks Norman Osborn why he publicly denounced his treatment of the Rat Pack problem, saying that the quasi-military group is a small-time problem compared with Galactus. Osborn replies that he takes personal offense on the issue because the Rat Pack could hurt his employees if they are not taken care of properly. The mayor does not buy this explanation, but he soon realizes that Osborn wants a position of power in the government and offers him one. Deputy Mayor Flaherty tells the staff of the Daily Bugle that Osborn will now fill the position of Public Advocate, previously held by Charenton, until a special election can be held.

Spider-Man finds Boomerang using his signature weapons to blow up crates at a gangplank while he strikes a deal some workers. During the ensuing battle, Spidey throws Boomerang at a nearby warehouse, but instead sends him crashing through the window of Josie's Bar and knock him unconscious. Spidey asks the bar customers if they know anything about the Rat Pack, and they say that its leader gets his instructions and finance from a higher power. Spidey swings to the other side of town to meet Mary Jane and his friends, Betty and Flash, at the Daily Grind. After their meal, Peter and MJ talk about Osborn's new position as public advocate. MJ says that the public advocate is next in line to be mayor if the current mayor dies. Peter begins to suspect that Osborn was behind Charenton's death and the Rat Pack raids.

Peter Parker persuades J. Jonah Jameson to give him a press pass to Osborn's reception. When Peter meets Osborn at the reception, Osborn promises to implement changes that will personally affect Parker and everyone around him. Parker perceives this as a threat and mentions the Green Goblin. Osborn becomes nervous and flinches at the name. Peter suspects that Osborn might be suffering from partial amnesia again as part of his madness.

Peter Parker recounts his battle with the Scorpion to Mary Jane as they develop the photos from the battle. Peter goes to the Bugle to sell his pictures. Parker shrugs off a large bruise he got in the battle with Scorpion while passing Betty Brant, but Joe Robertson tells him to be more careful while taking pictures. Jameson tells Parker to come to his office to talk to Norman Osborn. Parker suspects Osborn will finally kick him out of the Bugle. However, Osborn instead offers Parker a full-time job as a staff photographer in Europe.

Osborn explains that Parker and his wife would move to Paris where she could finish her education. As Parker considers his options, he notices Osborn genuine smile slip for a second into the Goblin's face. Parker says he needs to think over the plan and talk about it with his wife. Osborn says he has two days to decide.

Peter Parker goes back home and tells Mary Jane about Osborn's offer after she finishes her classes. He also voices his suspicions that Osborn is faking amnesia. Mary Jane considers the offer and asks Peter if there is any chance Osborn's amnesia could be genuine. Peter says he is sure, but Mary Jane urges him to think it over. Peter goes web-slinging as Spider-Man. He stops a holdup at Hal's Liquor, but still feels uncertain about his decision. Spidey resigns to check the offices of Osborn Industries to see if he can find anything that might connect Osborn to the Rat Pack.

Spider-Man sneaks into the Osborn Industries chemical plant through the roof. A watchman wearing elaborate high-tech armor notices Spider-Man and attacks using lethal force. More men wearing similar armor join the watchman, outnumbering Spidey. They promise that they will let Spidey leave if he surrenders, and Spidey almost agrees. Osborn arrives and tells his team to leave so he can talk with Spidey alone. Osborn references his time as the Green Goblin, convincing Spidey that his amnesia was faked. Osborn reminds Spidey that he is a high-ranking official now, and anything Spidey does to attack him is against the law. Osborn lets Spidey leave, telling him that he should have taken the European job.

Peter Parker goes back home and gets some rest. The next day, he goes to the Bugle and tells Jameson that he is turning down the job offer. Peter decides that he has to protect the mayor if Osborn had any assassination attempts planned. After several unyielding attempts to find the mayor, Spidey realizes Osborn would most likely target the man at a public event. Peter goes back home and finds his wife is still asleep even though she should be at her classes. Peter finds she has fallen unconscious.

Spider-Man takes Mary Jane to the Parkway Hospital. He changes back to Peter Parker to fill out some paperwork and accompany his wife. The doctors tell him that Mary Jane has symptoms that look like chloroform. Peter tries contacting Dr. Curt Connors, but he does not answer back. Peter travels to Empire State University, where a man tells him that Dr. Connors is at a two-week conference in Osaka, Japan. Parker learns from a news report that the Rat Pack is holding Parkway Hospital hostage. Spider-Man heads back toward the hospital.

A Rat Packer holds Ambrose Wiggins hostage. Ambrose notices Spider-Man clinging to the underside of the stairs. Spider-Man takes down the man taking Ambrose hostage and another terrorist. The freed hostages run outside to the reporters and police. A reporter tells Ambrose that another Rat Pack team is holding the mayor hostage in Manhattan. Inside the building, Spidey makes his way down and realizes the Rat Pack is escaping through the basement. Spidey learns that the mayor is being held hostage for half a billion dollars. Spidey checks to make sure that Mary Jane is all right.

Spidey follows the Rat Pack via a spider-tracer to City Hall Park. After learning more about the kidnapping situation, Spidey decides that the Rat Pack must have taken the mayor to New Jersey. He jumps on the traced van and rides to the docks of Jersey City. Spidey hides in a cargo crane to swing down and attack the Rat Pack members in the van and uses one of their gas masks to resist their tear gas attack. One Rat Packer starts firing a rocket launcher at Spidey, who stops him by using his webbing to make the missile explode just a few feet of the launcher. Spidey takes out the other gunmen and uses a radio direction finder to locate the other Rat Packers.

Billy Vanderlyn, the "Number Six" in the Rat Pack group, prepares his team to ambush Spider-Man at his checkpoint. Billy hears Spidey say on the radio that he is coming for them and that the mysterious "Mr. Green" they currently work for is actually the Green Goblin. The radio crackles again, this time with a message that claims he is Number Two. Number Nine answers the call and learns that it is actually Spider-Man. Billy monitors the situation as Spider-Man takes out more of the Rat Pack teams. Despite his orders to use a tranquilizer gun, Billy takes out his rifle. Spider-Man sneaks up behind Billy and ties him up with webbing. Spidey interrogates Billy and learns that Number One is might be at Torpey Chemical.

Spider-Man investigates the chemical plant and the Rat Pack team fires an energy cannon at him. However, since the cannon is not easily maneuvered, Spidey evades the blasts. Spidey taunts Osborn as he swings above the Rat Pack and takes them down, saying the Green Goblin could face him give him an actual fight. Osborn watches the fight, prepared to frame Spidey for the mayor's murder. However, Spidey does not comply and Osborn orders his two personal Rat Packer assistants to take the tied up mayor away. The Green Goblin finally enters main room of the chemical plant and faces Spidey.

The two enemies fight against each other and they both resist each other's attacks. The Green Goblin throws a gas grenade at Spidey, who grabs one a Rat Pack gas mask to stop it. Spidey yanks the Goblin off his glider and snaps one of its wings. The Goblin prepares to throw a bomb, but Spidey webs it to his hand. The Goblin tears away the bomb and throws it away, but it explodes and puts him in a daze. Spidey grabs the Goblin's bag of tricks and sets off one of the bombs, causing the rest of the bombs to explode. They continue attacking each other, and Spidey fight back with determination. The Goblin tries to escape, but Spidey stops him. On the ground, two Rat Packers hold the mayor hostage and tell Spidey to let the Goblin go. Spidey walks toward the two Rat Packers and they aim their guns at him, and Spidey webs their guns and knocks both of them out. He goes to collect the Goblin, but finds the villain has escaped.

Peter takes his wife home from the hospital on a wheelchair. Peter says the trail of evidence in the mayor's kidnapping led to a corporate vice president instead of Osborn, as he had hoped. Mary Jane mentions that Osborn has resigned from the position of public advocate.

Retrieved from "https://marvel.fandom.com/wiki/Spider-Man:_Goblin_Moon_(novel)?oldid=5789242"
Community content is available under CC-BY-SA unless otherwise noted.