MPAA: Rated PG-13 for sequences of action/violence, some language and brief suggestive comments

Quentin Beck frames Peter Parker for his death and reveals his identity to the world as Spider-Man, so Parker and his girlfriend MJ flee to their apartment. Though unsuccessful, Peter tries to hide the fact that his identity was exposed from Aunt May and Happy Hogan. Peter Parker, MJ, his best friend Ned Leeds, and his Aunt May are questioned by Damage Control. Parker's lawyer Matt Murdock has Parker cleared of all his charges but they are received negatively by the public. Parker, MJ, and Ned's MIT applications are denied due to the recent "controversy" surrounding them so Parker visits Stephen Strange at the New York Sanctum to ask him to wipe the world's memory of his secret identity. Strange begins the spell but due to Parker repeatedly asking him to alter the spell so his loved ones can know and gets out of control. Strange manages to close the spell and makes Parker leave.

Parker asks an MIT administrator to reconsider denying the applications of his friends but is attacked by Otto Octavius. Octavius' tentacles bond with Parker's nanotechnology, allowing Parker to disable them. Norman Osborn then arrives but he and Octavius are teleported back to the New York Sanctum and Octavius is placed in a cell. Strange reveals he has also imprisoned Curt Connors and reveals that the spell he casted caused people who knew Spider-Man's identity to cross over from other universes. He then tells Parker, MJ, and Ned to bring back the other villains. Parker manages to retrieve Max Dillon and Flint Marko.

Osborn regains control from his Green Goblin persona and finds May, who comforts him until Parker arrives. Parker learns from the villains that most of them were taken from their universes just before their deaths. Strange prepares to send the villains back and meet their fates but Parker disagrees and fights Strange, eventually stealing the spell and leaving him trapped in the Mirror Dimension. Parker and May then take the villains to Happy Hogan's apartment, and Parker manages to cure Octavius but Osborn's Green Goblin persona comes into control again and convinces the other uncured villains to betray Parker. Before the villains escape, Green Goblin fatally impales May with his glider, and as she dies in Parker's arms she tells him "with great power, there must also come great responsibility".

Ned discovers he can open portals with Strange's sling ring and attempts to locate Parker, only to accidentally bring over alternate versions of him from the same universes as the villains. The two Spider-Men find Parker and tell him how they lost their lost ones, convincing him not to give up. Green Goblin and Marko's Spider-Man is nicknamed "Peter-Two" and Connor and Dillon's Spider-Man is nicknamed "Peter-Three". The three Spider-Men develop cures for the villains and lure them to the Statue of Liberty, where they are assisted by Ned, MJ, and Octavius in fighting them.

Marko is second to be cured by Peter-Two at the top of the Statue of Liberty. Dillon is cured with the help of Octavius and is convinced to give up his villainous tendencies by Peter-Three. As Peter-One cures Connors, Ned uses a portal to free Strange from the Mirror Dimension. Peter-Two and Octavius are reunited and have a heart-felt reunion together. A furious Strange takes back the Macchina di Kadavus however The Green Goblin arrives and destroys the contained spell, which starts to bring in more people from different universes. Parker angrily tries to kill Green Goblin to avenge his Aunt May but he is calmed down by the Spider-Man from Goblin's universe Peter-Two, who is then stabbed in the back by Goblin. Peter-Three helps Peter-One inject Goblin with the cure, freeing Osborn from the Goblin forever. Parker realizes the only way to save the multiverse is by making the world completely forget his existence, and has Strange cast a spell to do so. As he says his final goodbyes to his friends, he promises to find them again. Strange's spell also sends the alternate Spider-Man and the redeemed villains back to their universes. Two weeks later, Parker decides Ned and MJ's lives are better without him and does not remind them of who he is. He then visits May's graves and makes a homemade suit for himself, continuing independent crime-fighting to honour his aunt's memories.

In a post-credit scene, Eddie Brock is returned to his universe as a result of Strange's spell but inadvertently leaves a part of the Venom symbiote behind.

Additionally, Tom Hardy makes an uncredited cameo as Eddie Brock / Venom, in a mid-credits scene. Harry Holland, Tom's younger brother, was set to make a cameo appearance as a drug dealer[8] however these were removed.[9] 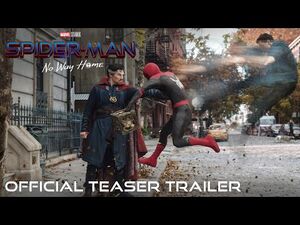 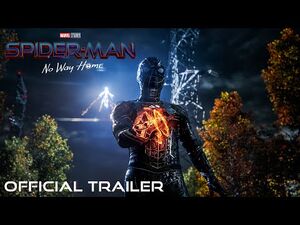 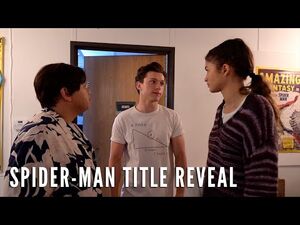 The New Spider-Man Title is…