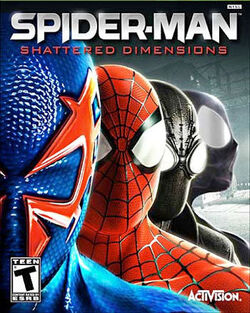 One night, in the Mainstream Universe, Mysterio breaks into Empire State University to steal the Tablet of Order and Chaos, the most powerful artifact. The Amazing Spider-Man then engages the Master of Illusion, breaking the tablet in the process. Mysterio escapes with a fragment of the tablet, leaving Spidey behind. Madame Web suddenly appears, and explains that the fragments of the tablet spread across their own dimension alongside three others:

"A past unlike our own" (Marvel Noir)

"A present out of sync" (Ultimate Marvel)

Madame Web explains that she has contacted the Spider-Men of the other three dimensions and explained their peril, and that they will do their best to retrieve the fragments. With that, Amazing Spidey swings away in search of the tablet fragments. Stories by Universe:

Amazing: Spider-Man finds the first tablet piece in his dimension by climbing up a wall with his wall-scaling ability and using his webs to pull away a chunk of debris it is buried under.

Ultimate: Ultimate Spider-Man, having tracked down one (or several) tablet piece(s), ends up with the Symbiote suit again. He initially wants it off, but Webb reassures him that the suit will have powers required for snatching the tablet pieces, and that she will control its bond to him. Ultimate Spidey then sets off.

2099: Spider-Man 2099 is trained with his new spider sense and tests his combat by beating up some Alchemax agents. He recovers the first fragment after defeating them all.

Noir: Spider-Man Noir finds the first piece in his universe guarded by a group of thugs at the train station. Using stealth, he learns to hide in the shadows and take his enemies by surprise without getting spotted by another enemies in order to get the fragment.

After all four Spider-Men find the first fragment of the tablet in each of their worlds, they go on to find any villains in possession of the remaining pieces of the tablet. Meanwhile, Mysterio takes hold of a fragment and gains new powers.

Amazing: Spider-Man finds the next piece of the tablet, but ends up being chased by Kraven the Hunter. After defeating him the first time, Kraven uses the tablet piece to gain super speed. The Amazing Spider-Man manages to defeat him and retrieve the fragment.

Ultimate: Ultimate Spider-Man finds Ultimate Electro (WARNING: without pants), who continually uses the fragment to become stronger until he becomes so powerful, Spider-Man can only defeat him by getting him to attack a dam, shorting him out.

Mysterio gets back to the museum to find a missing tablet to make powerful. Later he sensed there all four different Spider-Men had the missing tablet.

Amazing: Spider-Man discovers that the Sandman has found the next piece and that it has given him the power to control any sand just by looking at it. Sandman eventually becomes unstable and is defeated by Spider-Man.

Noir: Spider-Man Noir learns that the next tablet fragment is in the possession of Vulture Noir. He sees this as an opportunity to have revenge against the man who killed (and ate) his Uncle Ben. Vulture Noir does many things to try to get Spider-Man Noir out of his hair (or bald head), including leaving him in a burning building and getting him hit by a train. In the final battle, Vulture Noir gains teleportation powers, but is defeated.

Mysterio abducts Madame Web and threatens to kill her unless the Spider-Men give him the remaining pieces of the tablet.

Amazing: After Kraven and Sandman are defeated, the final fragment in the Mainstream universe ends up in the possession of Juggernaut. All the while, Juggernaut doesn't even know he has the fragment, and Spider-Man chases after him while attempting to prevent Silver Sable from blasting Juggernaut before he gets the tablet. When Juggernaut finds out that the tablet's on his shoes in the final battle, he becomes stronger, but is easily defeated because the fragment tangles with the mystic ruby that originally gave him his powers, making him vulnerable.

Noir: When Hammerhead Noir and Vulture Noir are defeated, Goblin Noir uses the fragment in his possession to become a large, hulking monster reminiscent of his Ultimate counterpart. After a long battle, Spider-Man Noir defeats him and retrieves the final fragment in his dimension.

Ultimate: Since Ultimate Electro and Ultimate Deadpool were defeated, the last fragment of the tablet in the Ultimate universe ends up being used by Carnage when S.H.I.E.L.D. foolishly put the fragment and Ultimate Carnage. Ultimate Carnage goes on a rampage, killing S.H.I.E.L.D. Agents and turning them into corrupted zombies, and some of them are slowly turn into mini-Carnage spawns. Spider-Man defeats Carnage with the help of the remaining agents with their reprogrammed Spider-Slayers as the Ultimate Spidey's allies, and retrieves the final fragment.

Spider-Man needs to find the other way before Mysterio gets it without killing Madame Web. It is revealed that the fragment can assemble itself, leaving the four realities ripped under Mysterio's control as a god. It is up to the four Spider-Men (Amazing, Ultimate, Noir and 2099) to save all reality.

After the Tablet of Order and Chaos is reassembled, Mysterio uses it to become a powerful god-like being. He then plans to destroy the multiverse and remake it in his own image. One by one, each Spider-Man defeats Mysterio and they retrieve the Tablet. After every other Spider-Man returns to their own respective universe, the multiverse is repaired and the mainstream Spider-Man sends Mysterio to jail.

The credits show every Spider-Man villain in the game in humorous situations. Kraven has a bandaged head and fails to catch a rabbit. The Sandman is imprisoned in an hourglass. Juggernaut has been tranquilized by Silver Sable and has a picture taken, much like hunters after capturing their prey. Hammerhead Noir is having his guns tied to his arms by his henchmen. The Vulture Noir is shown in a cage with makeup and people laughing at him. The Goblin Noir is initially stuck in his fragment form and shown wearing a sailor hat and giving balloons to children, one of which points and laughs at him at the re-opened carnival. Hobgoblin 2099 forms a team of Multi-Coloured Goblins, Scorpion 2099 is in prison cutting colored paper into different shapes with the other prisoners and Doctor Octopus 2099 is shown acting like a mother to her now childlike robot duplicates of Hobgoblin and Scorpion. Before the Ultimate Electro and Deadpool were taken to the S.H.I.E.L.D. custody, Ultimate Electro is initially stuck in his Full Power Form and shown hiding behind a bush (referencing Ultimate Spider-Man's jabs about him not wearing pants [or underpants or any under clothing]) and Ultimate Deadpool is revealed to be stranded on a deserted island, which is far away, meaning it will be a long time before he is found by S.H.I.E.L.D. Carnage is shown having a photo taken with his minions, the corrupted S.H.I.E.L.D. agents and the Spider-Slayer 1.0 robots, one of them giving him bunny ears. Mysterio is shown feeding goldfish, an allusion to how his helmet resembles a fishbowl. After the credits, Spider-Ham visits Madame Web, unaware that the multiverse has already been saved.

All four Spider-Men play differently. Amazing Spider-Man can use his webbing to beat up his opponents. Spider-Man Noir defeats his enemies by hiding in the shadows and sneaking up on his enemies with stealth, all the while avoiding being seen. Spider-Man 2099 possesses accelerated vision, which enables him to slow down time around him and avoid fast-moving attacks and obstacles. Ultimate Spider-Man uses the symbiote to attack his enemies with tendrils. He also has a rage meter which, once activated, causes him to just go crazy and beat up every criminal that comes in his path. The only powers all four Spider-Men appear to possess are Spider-Sense, wall-crawling, and using their webbing to swing around and to zip to platforms.

Amazing - Spider-Man chases Mysterio and fights him. When Mysterio nears defeat, he lifts up the Tablet of Order and Chaos to shield himself from Spider-Man's attacks. Spider-Man tries to use his webbing to pull the Tablet away, but accidentally breaks it, opening interdimensional rifts between the Mainstream, Noir, and 2099 universes. He is told by Madame Web to give the fragment left behind to Spider-Man Noir. Noir - Spider-Man Noir stops a museum heist and defeats his world's version of Boomerang Noir to receive the fragment. He passes it on to Spider-Man 2099. 2099 - Spider-Man retrieves the first Tablet fragment in his world from the Vulture and then escapes Alchemax agents in order to pass the fragment on to the Amazing Spider-Man.

Amazing - Spider-Man finds the first tablet fragment of his world used by the Tinkerer to power a robot-making machine. After destroying Tinkerer's machine, Spider-Man retrieves the fragment and passes it on to Spider-Man Noir, but not before the Tinkerer gloats that he has sold an army of his robots to Electro. Noir - Spider-Man Noir finds the last tablet in his world in the hands of Calypso Noir, who uses the fragment to raise an army of zombies, and also plans to use it to resurrect this world's version of Kraven Noir, who was killed when infected by the same spiders that gave Peter Parker his powers. Spider-Man defeats Calypso and gives the fragment to Spider-Man 2099. 2099 - The last fragment that ended up in the 2099 universe is revealed to be in the possession of Silvermane 2099, who is actually the original Silvermane from the Amazing universe, having survived into the near end of the 21st century due to being a cyborg. He plans to use the fragment to gain true immortality, but Spider-Man defeats him and gives the fragment to Amazing Spider-Man.

Amazing - Spider-Man finds the last tablet fragment in the hands of Electro. Spider-Man defeats him and reassembles the Tablet, but Mysterio uses it to become all-powerful. Fortunately, Spider-Man manages to defeat Mysterio and save all of every existing reality.

The DS version of the game features 2.5-D gameplay reminiscent of the Metroid video game series. Also, every Spider-Man has different capabilities. Amazing Spider-Man can crawl up walls and use his webbing to swing. Spider-Man Noir cannot wall-crawl, but can use his Spider-Sense to detect hidden objects. Spider-Man 2099 can't use webbing to swing, but can glide. Throughout the game, there are interdimensional anomalies that once entered enable the three Spider-Men to obtain a power their counterparts have that they don't possess.

Note: All the actors that voice the Spider-Men have voiced Spider-Man for television before. The names of the TV shows (and the continuity they exist in, if known) are provided along with the actors.

Retrieved from "https://marvel.fandom.com/wiki/Spider-Man:_Shattered_Dimensions?oldid=5562108"
Community content is available under CC-BY-SA unless otherwise noted.