"Sting of the Scorpion" 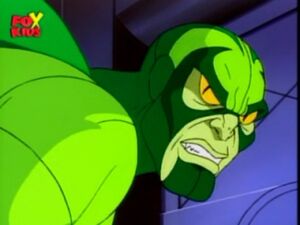 Episode Title
"Sting of the Scorpion"

Appearing in "Sting of the Scorpion"

Synopsis for "Sting of the Scorpion"

Felicia Hardy tells Peter Parker that while he can tutor her in Science, they cannot date. Peter is disappointed, and feeling rejected, ditches her after noticing a man following them. As Spider-Man, he stops a jewelry store robbery and webs up several crooks.

Having received several photographs from Peter of the action, J. Jonah Jameson questions him at the Daily Bugle on how he manages to get the shots. Peter later notices the man who was following him the previous evening meeting Jameson in his office, and having realised Jameson was the one who arranged for the investigator, Mac Gargan, to follow him, confronts them as Spider-Man. He webs up Gargan and tells Jameson to quit his persecution of him, which gives Jameson a brief flashback of his wife's death. After Spider-Man leaves, Jameson offers Gargan a chance to get back at the wallcrawler. At Professor Farley Stillwell's lab, Gargan's DNA is restructured by the neogenic recombinator to match that of a scorpion.

Spider-Man is ambushed by the Scorpion, who is able to gain the upper hand and defeat him. As he is about to unmask Spider-Man for Jameson, Gargan realises that he has become a freak, and attacks Jameson's helicopter. The helicopter returns to base at the Bugle, where Jameson realises that he's created a monster, as he views footage of the Scorpion wreaking havoc across the city. Jameson confesses to Robbie Robertson that he was the one who created Scorpion to end Spider-Man. He explains that he did it for his wife Julia Jameson, who was accidentally shot and killed by a masked gunman hired by a mob boss that Jameson was doing a story on back in his youth. Scorpion attacks Stillwell, demanding that he change him back, but Stillwell reveals that the process is irreversible. Scorpion then kidnaps Jameson, blaming and accusing him of using him as a way to have Spider-Man destroyed.

Scorpion heads for the Oscorp nuclear reactor with Jameson, planning to use radiation to change him back into human form, despite Jameson's pleas that doing so would release radiation on the whole city. Spider-Man arrives to stop him, but Scorpion activates the neutron absorbing control rods. As Spider-Man is about to be killed by Scorpion, Jameson saves him, and they are able to stop him from releasing the radiation by defeating him. Despite their brief alliance, Jameson tells Spider-Man that nothing has changed between them, and he won't rest until he's been "unmasked and eliminated", while Gargan is sent to jail.

Later, Felicia agrees to a date with Peter.

Retrieved from "https://marvel.fandom.com/wiki/Spider-Man:_The_Animated_Series_Season_1_2?oldid=5279799"
Community content is available under CC-BY-SA unless otherwise noted.