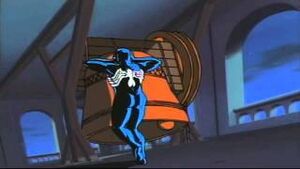 This is why they call me the Shocker!

As Spider-Man continues to be hunted by men seeking to claim J. Jonah Jameson's reward for his capture, he discovers that his black suit appears to have a weakness to intense sound after some men use a sonic blaster against him. Spider-Man then decides to confront Jameson, warning him to call off the reward, but the publisher refuses. However, after visiting John in hospital, Jameson discovers that the Rhino was indeed at the scene of the shuttle robbery, prompting him to fire Eddie Brock for his lies and call off the bounty on Spider-Man.

Alistair Smythe demonstrates Prometheum-X's power to the Kingpin's buyers, showing that less than a microgram of the substance can cause large-scale explosions when ignited. After watching Jameson's broadcast withdrawing the reward on Spider-Man and revealing the idea of the Rhino at the scene of the crime, Kingpin sends the Shocker to eliminate Eddie Brock, in order to prevent the shuttle robbery from being traced back to him.

Meanwhile, Spider-Man asks Dr. Curt Connors to carry out some tests on his black suit, and although reluctant at first Connors does so and reveals that the suit is actually a symbiote, a living organism which must bond to a host to survive. He warns Spider-Man that in time the symbiote would replace it's host, urging him to remove it. However, Spider-Man is reluctant.

When the Shocker confronts Brock and prepares to silence him, Spider-Man arrives and interferes, allowing Brock to escape. Shocker flees, and Spider-Man follows, stealing the Prometheum-X from him and Smythe. Back at home, Spidey analyzes the Prometheum and makes an interesting discovery.

The Kingpin demands that the Promtheum-X be recovered immediately, and Smythe arranges for Shocker to kidnap John Jameson from his hospital bed and hold him at ransom for the Prometheum. J.J. then asks Spider-Man to help him return John, which is successful, but Smythe double crosses Spider-Man, ordering Shocker to destroy him. As they fight, Spider-Man easily gains the upper hand, webbing up an interfering Brock, before almost killing Shocker, although he refrains by saving him from a lethal fall. Spider-Man uses the sound of the ringing church bells to separate from the symbiote. Weakened by the intense sound, the symbiote slithers down a crack in the floor, with Peter assuming it destroyed and fleeing the scene.

Back at Kingpin's HQ, his clients demand proof that the Prometheum isn't a fake before they pay for it. Alistair attempts to ignite the rock but nothing happens. Examining it, he reveals that the Prometheum had transmutated completely into lead due to its radioactive half-life that reduced its atomic structure within a matter of days. Kingpin is upset that Alistair didn't inform him of this sooner, to which the latter retorts that he never got an opportunity to study it. Either way, the Prometheum-X is useless and Kingpin's clients refuse to pay for it. An angry Kingpin grumbles that Spider-Man knew about this all along.

Meanwhile, the symbiote bonds with Brock.

Like this? Let us know!
Retrieved from "https://marvel.fandom.com/wiki/Spider-Man:_The_Animated_Series_Season_1_8?oldid=6498929"
Community content is available under CC-BY-SA unless otherwise noted.