Part of the Neogenic Nightmare event.
"Battle of the Insidious Six" 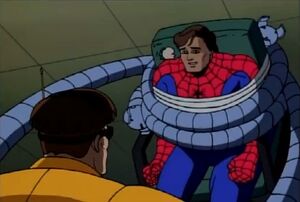 Appearing in "Battle of the Insidious Six"

Synopsis for "Battle of the Insidious Six"

Spider-Man fights the Insidious Six, and having lost his powers he is defeated by them. They unmask him, but Doctor Octopus comes to the wrong conclusion that Peter Parker is not in fact Spider-Man because of his poor performance against them, and that he had put on a fake Spider-Man costume to rescue his Aunt May. As a result of the Six's "failure", Silvermane rallies the crimelords and wages war on the Kingpin's empire.

The Kingpin has Rhino, Shocker and Scorpion attack Silvermane's base, Chameleon and Mysterio hide in the "hospital" while Doc Ock sends Aunt May home, but they warn Peter that if he doesn't take them to the "real" Spider-Man, they will kidnap her again. After, Chameleon takes the form of Hammerhead and pretends to help Silvermane, but instead reveals himself and kidnaps him, before taking form of Silvermane himself and calling off the attack on Kingpin.

Peter leads the Insidious Six to a roof where which he claims to normally meet with Spider-Man. Peter, having previously stolen some of Mysterio's holocubes, causes a distraction and makes his escape, pretending to warn Spider-Man of the six before falling from the building, and then returns as Spider-Man. As Silvermane dangles from the Kingpin's helicopter, Spider-Man saves him and they escape into the building. The six follow them, but Spider-Man manages to elude them and get the old man to safety.

After Spider-Man escapes from the Insidious Six, they disband, much to Kingpin's dismay. Peter then asks Felicia Hardy if she would like to have dinner with him, but she announces that she is now dating Michael Morbius. After returning home to see Aunt May and Mary Jane Watson, he goes to see Dr. Connors as Spider-Man, and Connors tells him that he is still changing, and could mutate into something which is not human.

Like this? Let us know!
Retrieved from "https://marvel.fandom.com/wiki/Spider-Man:_The_Animated_Series_Season_2_2?oldid=6498937"
Community content is available under CC-BY-SA unless otherwise noted.