Part of the Neogenic Nightmare event.
"The Mutant Agenda" 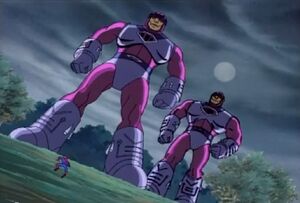 Appearing in "The Mutant Agenda"

Synopsis for "The Mutant Agenda"

Spider-Man turns to X-Men leader Charles Xavier concerning his growing mutation, but Xavier cannot help him. However, Beast directs him to the Brand Corporation which is allegedly working on a cure. It turns out that founder Herbert Landon's true motive is to destroy all mutants, and Landon has Beast captured as a test subject. Spider-Man finds out about Landon's hidden agenda through the Hobgoblin (who was blackmailing Landon with this knowledge). Wolverine blames Spider-Man for Beast's capture and attacks him. The Hobgoblin prepares to destroy both Spider-Man and Wolverine with a pumpkin bomb.

Spider-Man is terrified that he could be mutating into some kind of monster. Desperate for a cure, he seeks help from Professor Charles Xavier. However, when he arrives at Xavier's school, the mansion's defense system identifies him as a threat and he is dropped into a holding chamber in a metal straightjacket. There, he is confronted by the X-Men, who question him about why he is at the mansion. Wolverine suggests they "go digging for an explanation", although Spider-Man manages to escape and webs up the startled X-Men. He leaves the chamber, but while wandering through the hallways looking for a way out he enters a door which he believes leads out of the mansion, but is actually the Danger Room (which Gambit was using). Spider-Man then briefly fights the Sentinels until Jean Grey turns it off. Professor X finally arrives to end the fighting, giving Spider-Man the chance to explain himself.

Meanwhile, Herbert Landon meets with the Hobgoblin. Hobgoblin is aware that Landon has promised to create an army of supermutants for the Kingpin, and Hobgoblin threatens to reveal that he is double-crossing him unless he pays him. As Landon leaves, he attempts to eliminate the goblin by destroying the building, but Hobgoblin escapes. Landon then receives a call from the Kingpin, asking how he is making progress with the supermutants. Landon tells him to attend the press conference (or send one of his informants) the following day to find out.

Spider-Man explains to the Professor that his mutation could change him into something dangerous. Unfortunately, Xavier tells him that he cannot offer a cure, and that his role is to train mutants, and help them accept themselves as well as gain acceptance in society. After a disappointed and frustrated Spider-Man leaves the X Mansion, Beast catches up with him and tells him that he knows Herbert Landon, the founder of the Brand Corporation who is working on a cure for mutancy. After Spider-Man swings off, Beast is ambushed and captured by a team lead by Lewald who were looking to capture a mutant.

The following day, the X-Men notice that Beast is missing, so Wolverine decides to look for him. He tracks Beast's scent until he also finds the scents of Spider-Man and Beast's captors, thus concluding that Spider-Man lead Beast into an organized trap. At the same time, Peter is at the Brand Corporation conference, which is disrupted by the Hobgoblin. The ensuing fight between Hobgoblin and Spider-Man causes the roof to cave in, but an unknown telekinetic force saves Spider-Man from falling debris. After fleeing the conference, Landon visits a captured Beast and reveals that he has continued Hank's old research, which initially was to find a cure for mutancy, but instead intends to destroy all mutants, and plans to test it out on Beast.

When Spider-Man finds the Hobgoblin, he demands to know what he has against Landon, and Hobgoblin reveals Landon's true intentions which are to destroy all mutants. Suddenly, Wolverine appears and attacks Spider-Man, wanting to know what happened to Beast. As they fight, Hobgoblin prepares to destroy both with a pumpkin bomb.

Like this? Let us know!
Retrieved from "https://marvel.fandom.com/wiki/Spider-Man:_The_Animated_Series_Season_2_4?oldid=6498939"
Community content is available under CC-BY-SA unless otherwise noted.