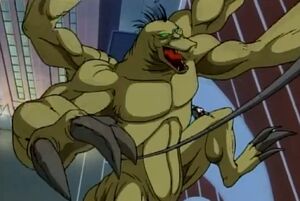 Spider-Man and Wolverine team up to rescue Beast from Landon, who has created a serum to destroy mutants. They arrive just in time to save him, but The Hobgoblin (having downloaded all of Landon's research onto a disc) appears and causes Landon to fall into the serum himself before fleeing. Landon mutates into a monstrous creature that feeds on electricity, leading to Spider-Man and the X-Men having to stop him from absorbing the city's power. After, Spider-Man discovers Doctor Mariah Crawford is working on a cure for his own mutation disease.

Landon's assistant Genevieve explains to Beast that Landon is trying to end the mutant condition by destroying them, and believes it is the only way to end their suffering. Meanwhile, Spider-Man and Wolverine enter Landon's building and fight their way through Landon's men, and Hobgoblin hacks into one of the computers and downloads all of his research. Wolverine and Spider-Man arrive just in time to disturb the experiment, but Wolverine is almost treated to the serum himself after he tries to grab hold of the electric bars of Beast's cage. The Kingpin's informant in the premises, Lewald, leaves after telling the crimelord that it appears Landon never intended to create a mutant army for him. Hobgoblin arrives with Landon's research on a disc and threatens to destroy his life's work. Landon tries to stop him, resulting in him falling into the serum himself, and Hobgoblin flees.

After Spider-Man saves Beast and Wolverine from falling into the serum, Landon emerges from the vat and mutates into a large slug-like creature. He kidnaps Genevieve and starts to absorb electrical energy sources from the city, causing him to grow in size. The rest of the X-Men arrive at the scene to help them in their Blackbird, using the microwave antenna from the ship and a cable to lift Landon. When he is too heavy and pulls the ship towards the ground, Genevieve uses telekinesis to save the ship, revealing herself as a mutant, having worked with Landon because she believed he had a cure for mutancy. Landon's mutation is reversed (although still possesses a mutated half of his face and body) and he is taken away in an ambulance.

The X-Men offer to introduce Genevieve to Professor Xavier in order to help her accept her mutancy. They also befriend Spider-Man and thank him for working with them. Spider-Man then discovers that Dr Mariah Crawford is back in New York and could help him with his own mutation disease.

Like this? Let us know!
Retrieved from "https://marvel.fandom.com/wiki/Spider-Man:_The_Animated_Series_Season_2_5?oldid=6498940"
Community content is available under CC-BY-SA unless otherwise noted.