"The Man Without Fear" 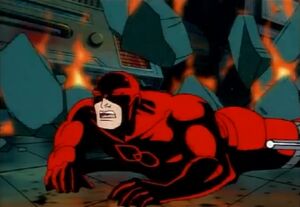 Appearing in "The Man Without Fear"

Synopsis for "The Man Without Fear"

Spider-Man and Daredevil escape from the exploding complex, but Spider-Man manages to retrieve the data disc which could clear Peter Parker's name. Daredevil reveals to him that Wilson Fisk is the Kingpin and he is the one who conspired to frame Peter, but they split up and flee after being ambushed by federal agents.

Back at Crime Central, Richard Fisk tells his father that Peter Parker has escaped, and also shows him the security footage of Spider-Man downloading evidence from the building before it exploded. The Kingpin, worried that this could lead to the exposure of his criminal activites, blames Alistair Smythe for the scandal, since it was his idea to frame Parker in the first place. They hear on the news about May Parker collapsing in her home, and Kingpin decides to send Chameleon to the hospital in case Peter shows up to visit her.

Matt Murdock gives the data disc to Agent Choi, unaware of her agenda as part of the plan to frame Parker. She subsequently phones Richard, and when they meet up she hands him the disc. Detective Terri Lee watches on suspiciously, realizing that Peter may have been framed.

Peter decides to visit his Aunt May, but the Chameleon takes form of Anna Watson and kidnaps both him and Mary Jane, bundling them into a van. They are taken to Richard's home, where he prepares to execute them again by means of suffocation.

The Kingpin explains his past to Smythe; about his father and how he became a crimelord. He reveals that he had his father killed after years of prison for previously betraying him.

As Peter and Mary Jane are placed in the suffocation chamber, they almost suffocate, but Detective Lee and Daredevil arrive to save them. They are saved, Agent Choi and Richard are arrested, but the Chameleon escapes. Spider-Man and Daredevil chase his helicopter back to Crime Central, where Daredevil fights Kingpin, while Spider-Man keeps security busy. Daredevil and Kingpin are evenly matched, but Spider-Man interferes, although the crime lord escapes since Spider-Man runs out of webbing. They chase and take down his helicopter, but the real Kingpin has escaped and the one in the chopper is the Chameleon in disguise, but they do retrieve the data disc which proves Peter Parker's innocence.

In court, Richard Fisk, Susan Choi and the Chameleon are found guilty. Richard is asked to name accomplices to gain leniency. After, Daredevil and Spider-Man part ways. Daredevil asks him to fight the Kingpin in New York while he and Murdock go to Washington D.C. to gather legal evidence against the crime lord.

Like this? Let us know!
Retrieved from "https://marvel.fandom.com/wiki/Spider-Man:_The_Animated_Series_Season_3_7?oldid=6498956"
Community content is available under CC-BY-SA unless otherwise noted.