"Law of the Jungle" 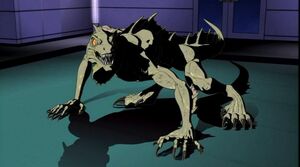 Episode Title
"Law of the Jungle"

Appearing in "Law of the Jungle"

Synopsis for "Law of the Jungle"

Peter Parker earns much needed cash by working at the lab for his professor, Doc Connors, a world class scientist. Doc Connors is studying reptilian DNA for its regenerative powers. This is extremely important to Doc Connors because he lost an arm in an industrial accident at Oscorp years before. Meanwhile, as the year anniversary of the death of Norman Osborn approaches, Harry Osborn reluctantly asks Peter and Mary-Jane Watson for help sorting through his father's personal effects. Back at the lab, Doc Connors secretively injects himself with reptilian DNA that not only stimulates his arm stump to grow again but also has the undesired effect of slowly changing Doc Connors into an angry, vengeful Lizard. As the serum effects the Doc's brain, he begins seeking revenge on those who have harmed him and next on his list is Harry unless Spider-Man is able to stop his beloved professor in time.

Retrieved from "https://marvel.fandom.com/wiki/Spider-Man:_The_New_Animated_Series_Season_1_3?oldid=5296023"
Community content is available under CC-BY-SA unless otherwise noted.