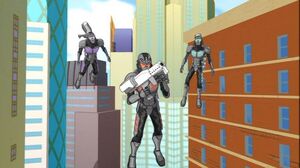 A boardroom meeting is interrupted by Pterodax, a trio of former KGB agents, led by Sergei who blast through an outside window to gain entry into the building. Pterodax are a well-outfitted organization who use sonic blasters, fluoroscopic vision and are encased in heavy body armor. Additionally, the trio sport jetpacks that enable them to fly. Over at Empire State University, it's a harmless afternoon where Harry Osborn, Mary-Jane Watson and Peter Parker take turns peering through a pair of Harry's binoculars. When it's his turn, Peter spots Pterodax invading the meeting and hurries off to the rescue as Spider-Man. Pterodax are moments away from detonating a safe in the room in order to steal its contents - "prototype hyper-diamonds" when Spider-Man shows up. He defeats them, then as Peter it's off to news channel Empire-1 to sell a Spider-Man news video. At the station, Peter is introduced to Indira Daimonji, a beautiful television intern who aids him in getting his footage aired. Unfortunately, it also lands the both of them as one of many hostages when Pterodax commandeers the newsroom. Pterodax's demands are simple, they want Sr-Man or they will start eliminating hostages! As soon as the moment presents itself PETER escapes into the shadows to re-emerge as Spider-Man. However, Pterodax has set a trap for Spider-Man and know one knows that they plan on being the only ones getting out of the station alive.

Retrieved from "https://marvel.fandom.com/wiki/Spider-Man:_The_New_Animated_Series_Season_1_6?oldid=5339355"
Community content is available under CC-BY-SA unless otherwise noted.