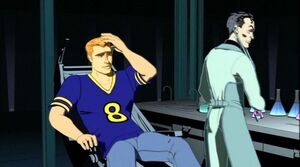 The Biker Twins, rob an armored car then throttle up their motorcycles for a clean getaway until Spider-Man intervenes. However Spider-Man is surprised at how smart they were in plotting the robbery. At the Empire State University campus Flash flaunts the fact to Mary Jane Watson that he doesn't have to study anymore because he has landed himself a tutor. What a surprise when Flash learns that his tutor is actually Dr. Zellner who is actively testing his new Brain Booster the first subjects being the twins with substantially impaired IQ. Flash's fame evolves from athleticism to intellectualism as he charms members of the female student body with his wit and knowledge of language and recitation of Shakespeare. However, soon it becomes obvious that there are physical side effects of this smart serum. The Doctor is stumped as to why this is occurring and decides that he find an antidote via a more intelligent candidate, Peter Parker. The twins continue to have Dr. Zellner pump them full of the Brain Booster in an effort to pull off more elaborate crimes that only Spider-Man stop along with rescuing Flash from the Doctor.

Retrieved from "https://marvel.fandom.com/wiki/Spider-Man:_The_New_Animated_Series_Season_1_9?oldid=5250869"
Community content is available under CC-BY-SA unless otherwise noted.