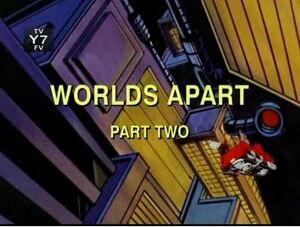 Spider-Man reaches his destination on Counter-Earth and finds out that John Jameson survived the crash. He has become a member of a rebellion fighting against the forces of High Evolutionary, the counter-Earth version of the High Evolutionary, a figurehead who hates humans and creates animal-mutant hybrids called the Beastials. Spider-Man then joins the group and moves in with a single mother, Dr. Naoko Yamada-Jones, and her son, Shane Jones.

Retrieved from "https://marvel.fandom.com/wiki/Spider-Man:_Unlimited_(animated)_Season_1_2?oldid=5227495"
Community content is available under CC-BY-SA unless otherwise noted.