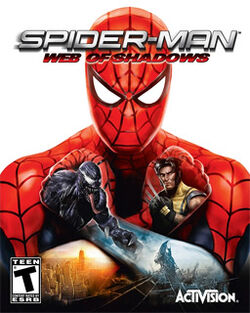 The story begins with Spider-Man defending Mary Jane Watson from Venom. In the middle of Midtown Spider-Man grapples with Venom. A part of the symbiote binds to itself to Parker, and Spider-Man continues the fight. With his symbiotic power, Parker defeats Brock but loses him. Mary Jane is rushed to the hospital.

Spider-Man joins up with Power Man in the war against the Rolling Sevens Gang and the Park Avenue Gang. When Cage finally sets up a truce between the two, the meeting is attacked by heavily armed mercenaries. Spider-Man traces the attackers to Wilson Fisk Industries, home of the Kingpin. When attempting to confront Kingpin, Spider-Man runs into Black Cat. Assuming she is working for the Kingpin, Spider-Man chases her down. Black Cat claims that she was trying to infiltrate Fisk's heist operation. Parker investigates and foils Kingpin's attack on the city. He traces the manufacturer of Kingpin's armor to the Vulture, who he defeats in a mid-air battle.

When Spider-Man confronts the last of Kingpin's troops on a rooftop, the group is attacked by aggressive civilians. The civilians climb up the building and proceed to tear the group apart with their bare hands and teeth. Spider-Man defends himself and is seen by the police to have attacked "harmless" civilians. Now seen as a criminal, Spider-Man investigates the strange behavior of Manhattan's citizens. He is confronted by Moon Knight and attacked by Wolverine. After convincing Wolverine that he has his symbiotic suit under control, the duo set out to pacify the aggressive citizens, confirmed to be infected by the same symbiote Spider-Man wears.

During his campaign to cleanse the city, Spider-Man discovers that Venom is cloning himself using the symbiote suit he wears. These clones form hives in many parts of the city. From these hives, they launch an invasion against the citizens of the city, kidnapping them and throwing them into the hives. S.H.I.E.L.D. sends a helicarrier to Manhattan quarantining citizens, determining which are infected and which are not. Black Widow is appointed head of the S.H.I.E.L.D. quarantine operation. Electro attacks one of the establishments, looking for his sister. Electro finds his sister, but only after being defeated by Spider-Man. Electro's sister is one of the infected and the symbiote infects them both. Now bonded to his own symbiote, Electro flees.

Soon the streets of New York become over-run with symbiotes. Spider-Man attempts to contact Reed Richards and Tony Stark in order to create a device that will disinfect the city and destroy the symbiotes. With neither available, he decides to break the Tinkerer out of Ryker's Island and succeeds with help from Rhino. Tinkerer builds a sonic device to wipe out any traces of the symbiote invasion. S.H.I.E.L.D. starts building the device on top of the Trask Building. The island of Manhattan is now sealed off. During the device's construction, Spider-Man helps evacuate uninfected citizens inside the city and defeats symbiote possessed versions of Electro and Wolverine. While trying to find Mary Jane with Luke Cage, Spider-Man battles the symbiote-possessed Black Cat, nearly killing her.

After all the citizens are cleared, the Tinkerer is ready to set off the sonic emitter, but it is attacked by a now symbiote possessed Vulture and his symbiote henchmen. Spider-Man defeats Vulture uses his device to his own means. The S.H.I.E.L.D. helicarrier is then attacked by Venom and more symbiotes. With the help of his allies, Spidey sets bombs on the helicarrier in order to destroy it. Spider-Man finally confronts Venom in his newly hideous form: a hydra-looking monster with multiple heads. Spider-Man confronts the terrorized Eddie Brock inside the Venom monster, asking Brock why he changed from a psychotic crime-fighter to a destructive monster hell-bent on destroying the city. Brock, trying to free himself from the symbiote monster is sucked into one the helicarrier engines. The helicarrier crashes in the Hudson River destroying the Venom monster and seemingly killing Brock.

Spider-Man is out in the city when he encounters Venom. Spider-Man defeats Venom and the symbiote explodes, scattering itself over the city and knocking Spider-Man unconscious. When Spider-Man comes to, he receives a call from Nick Fury explaining that Venom has infected the city and that S.H.I.E.L.D. are quarantining Manhattan. He informs Spider-Man that he needs to help build a Sonic Generator and one of the components is Shocker's gauntlets. Nick Fury tells Spider-Man that Shocker is breaking into the Duhart Hotel.

Spider-Man is then contacted by the Kingpin who receive instructions to build a Sonic Generator and advises him to obtain some vibranium from an underground laboratory run by his former associate Spencer Smythe who has allied with A.I.M.. At the Duhart Hotel, he encounters Shocker and defeats him. Spider-Man persuades him to hand over his gauntlets to help stop the symbiotic invasion.

Spider-Man meets up with Luke Cage before facing the first 'infected' citizens. After toppling a water tank to put out a fire, Spider-Man is presented with the option of changing the direction of a train filled with infected people - either the train continues along the current course or Spider-Man sends it in Luke Cage's direction.

Spider-Man then heads to a warehouse where the Tinkerer is building a missile that will spread the symbiotes to other cities. Spider-Man prevents this, but Tinkerer escapes.

Spider-Man arrives at the S.H.I.E.L.D. Helicarrier where he helps to complete a sonic generator to stop the symbiotic invasion. After rescuing Jessica Drew, Spider-Man fights infected agents. He then restores the defense systems, Spider-Man encounters Jackal, who plots to obtain Spider-Man's symbiotic suit for his own purposes. Spider-Man defeats Jackal who gives him a serum that will enhance his black suit. Jessica Drew then contacts Spider-Man informing him that the Helicarrier is going down and that they have to evacuate.

Spider-Man follows the trail of the helicopter crash, then rescues some S.H.I.E.L.D. Agents from the symbiote monsters. Spider-Man finds Jessica who has become infected by the symbiotes. After defeating her and obtaining the S.H.I.E.L.D. plans, he gets a call from Nick Fury to obtain the Sonic Generator from the top of Fisk Tower.

While heading to Fisk Tower, Spider-Man gets a text message from Nick Fury to recover Egyptian artifacts stolen from a museum 2 weeks ago that are in a safe near where he is. After making it to the top and defeating A.I.M. soldiers, Jackal appears and steals the Sonic Generator. Spider-Man then gets a call from Spencer Smythe saying he has captured the Black Cat and is using a mind-control device on her. Spider-Man is forced to defend himself against Black Cat.

The game begins with the symbiote invasion already in progress. Thinking Venom responsible, Spider-Man searches for him. Along the way he encounters Black Cat who informs him of two choices that he can be of assistance on - Nightcrawler is helping out with the evacuation and Green Goblin is setting up bombs to defeat the symbiotes. Who Spider-Man helps is decided upon by the player. After defeating several super symbiotes, Spider-Man eventually arrives at a symbiote hive where he encounters and defeats Venom. Venom informs Spider-Man that he is not responsible for the alien invasion, but was trying to stop it. He reveals that if the hive's symbiote leader is defeated, all of the infected will return to normal. With Venom now too weak to accompany him, Spider-Man decides to infiltrate deeper into the hive by himself and eliminate the leader. After defeating the Symbiote Leader, Spider-Man quits the symbiote hive while it collapses, after that, every citizen is freed from the symbiotes, turning everything back to normality.

Spider-Man: Web of Shadows is a video game title encompassing three versions: a full-3D action game for Xbox 360, PlayStation 3, Microsoft Windows and Wii; a 2.5D side scrolling beat em up action game for the PlayStation Portable and PlayStation 2 (called Amazing Allies Edition), and a 2.5D side-scrolling brawler/platformer[11] for the Nintendo DS. Previous to the release of the film a poll was made, so fans could decide which of the presented covers of the game was better and the winner was used for the boxart.

At various points in the game, the player will be able to choose between "good" and "evil" paths. There are four endings depending on how the game is played out. In addition, the player will decide which villains to fight against. The player will be able to switch between the classic red and blue suit, and the Symbiote suit at any time during gameplay.[10] Chris Scholz from Shaba Games also commented that the developers "worked on really separating the black and red suits to give the player a different feel." For example, Red & Blue-suited Spider-Man will be fast and agile, while Symbiote Spider-Man will be stronger and more destructive. The mini-map on the screen will also change. The traditional 2-D overhead view will be removed, replaced by a new 3D map with an "X", "Y" and "Z" axis which shows the player's position in three-dimensional space (north and south, as well as vertical position).

Depending on actions taken within the game, four endings are available, based on two main endings:

Good Ending: If Spider-Man is aligned to the Red Suit after defeating Symbiote Vulture, Spider-Man activates the device on top of the Trask Building, destroying every symbiote bonded to anyone and everyone, including his, saving the entire island.

Bad Ending: If Spider-Man is aligned to the Black Suit after defeating Symbiote Vulture, Spider-Man destroys the device on top of the Trask Building, pushing it off the pinnacle to fall into the streets below. Spider-Man becomes the ruler of the symbiotes and the island. The game ends with the Black Widow appointing the symbiote-possessed Wolverine to seek out and destroy Spider-Man.

The PS2 and PSP versions were released as Spider-Man: Web of Shadows - Amazing Allies Edition. These versions of the game are a 2.5D scroller game instead of a free-roam game as on the XBox 360, PS3, Wii and PC. Spider-Man can still switch between the Black Suit and Red Suit. There are also conversations in which you may choose what Spider-Man says, which may affect the outcome of the game. There are also fewer upgrades. The story of the game is also changed a little.

The Nintendo DS version is also a 2.5D scrolling action brawler. Much like the console games, enemies drop exp points when defeated which can be used to purchase new moves for Spider-Man. As the player progresses through the story they will also obtain upgrades that will allow them to explore more of the open world map and eventually reach the end of the game. Many reviewers have often compared this game to the Castlevania and Metroid franchises for its similarities. At certain points in the game, the player will be need to decide which mission to undertake next, these decisions in turn will change the overall outcome of the game. This version is the only version in which Venom is not the cause of the invasion and can be your ally. This also shows the fewest number of allies: Black Cat, Venom, Green Goblin and Nightcrawler. During the game play the player can switch between the red and black suit at will with each suit having unique abilities (Red suit is more equipped for swift and dynamic movement and fast flurry of attacks while the Black suit is used for overwhelming powerful but slower attacks and devastating large masses of enemies).

Like this? Let us know!
Retrieved from "https://marvel.fandom.com/wiki/Spider-Man:_Web_of_Shadows?oldid=6842070"
Community content is available under CC-BY-SA unless otherwise noted.