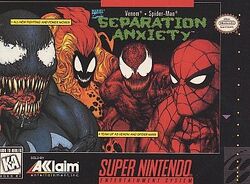 Other Characters: Some other heroes and anti-heroes aid Venom and Spidey throughout the game, making brief cameos to attack the player's foes.

Spider-Man and Venom team up against the new threat of the Life Foundation, and their five newly spawned symbiotes:Having escaped from the clutches of the treacherous Life Foundation, Venom seeks the aid of his most hated foe, Spider-Man! A tenuous alliance is formed as the Lethal Protector and the Amazing Web-Slinger race to stop the life Foundation from using the symbiotes spawned by Venom in their evil undertakings.

The player/players travel through 18 levels until the Life Foundation's plans are utterly foiled.

Despite the title of Separation Anxiety, the game mostly consists of the story comprising Venom's Lethal Protector mini-series.

Retrieved from "https://marvel.fandom.com/wiki/Spider-Man_%26_Venom:_Separation_Anxiety?oldid=2643210"
Community content is available under CC-BY-SA unless otherwise noted.