Spider-Man and the X-Men in Arcade's Revenge 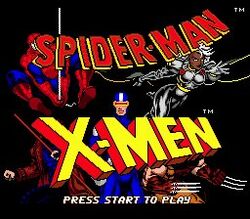 Spider-Man has been noticing strange occurrences in the city as one by one, the X-Men are being captured by a man who calls himself Arcade. After witnessing Gambit's abduction, he tracks Arcade down to an abandoned building, where he, along with Cyclops, Storm, Wolverine and Gambit, are placed in the deadly games of Muderworld, a simulated program designed by Arcade to torture and kill his victims. After surviving the deadly traps, the X-Men escape only to be recaptured and it's up to Spider-Man to stop Arcade. After defeating him, he blows the building up. Spider-Man and the others survive but there is no sign of Arcade.

Like this? Let us know!
Retrieved from "https://marvel.fandom.com/wiki/Spider-Man_%26_X-Men:_Arcade%27s_Revenge?oldid=5892485"
Community content is available under CC-BY-SA unless otherwise noted.