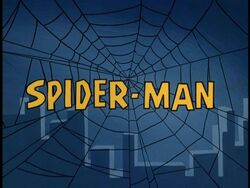 Spider-Man is an animated television series that ran from September 9, 1967 to June 14, 1970. It was originally produced in Canada and was the first animated adaptation of the Spider-Man comic book series. It first aired on the ABC television network in the United States but went into syndication at the start of the third season.

It featured the adventures of Marvel's most famous character and it has proven to be the most famous, as well as the final, production by Grantray-Lawrence Animation in Toronto, Ontario. Some Canadian talent was employed on the project, while animators from the United States were brought in at considerable expense and made up most of the crew behind the show. Grantray-Lawrence was contracted by Krantz Films, Inc. and Marvel Comics to yield 52 shows.

The show's acting talent included Bernard Cowan who was the dialogue director, narrator, and voice of some supporting characters. Paul Soles was both Peter Parker and Spider-Man. Peg Dixon provided the voice of Betty Brant and various of Peter's love interests, and Paul Kligman's distinctive, high-pitched voice was utilized on J. Jonah Jameson and several villains.

After Grantray-Lawrence went bankrupt, the second and third seasons were produced at a dramatically reduced budget by Krantz Films under Ralph Bakshi. This cost cutting is most apparent with two episodes reusing almost the entire footage from two Rocket Robin Hood episodes as well as remaking previous episodes with minimal changes. In addition, the episodes took a darker tone with darkly colored settings and atmospheric music.

Spider-Man was initially broadcast in the U.S. on Saturday mornings on ABC. The first episode that aired was "The Power of Doctor Octopus"/"Sub-Zero For Spidey" on September 9, 1967. For the full run of the first season and of the second season, the show was seen at 11 am Atlantic Time. ABC's last Saturday morning broadcast of Spider-Man was on August 30, 1969, with 39 half-hour episodes (many with two separate stories) aired. The show went on hiatus until the following March, when a third season began a six-month run, from March 22 to September 6, 1970, on Sunday mornings, at 11:30 am Atlantic Time.

In particular, the theme song of the show has become a popular standard. The lyrics were written by Academy Award winner Paul Francis Webster, while the music was composed by Bob Harris, Stu Phillips, and D. Kapross. The song begins "Spider-Man, Spider-Man / Does whatever a spider can". Variations on the song were used in the 2002 Spider-Man film and the 2017 Spider-Man: Homecoming film.

The song has been covered by:

ABC did not air the Revolt in the Fifth Dimension episode with the rest of the third season, possibly because of the incidence of death, spatial creepiness, and great psychedelia in that episode. ABC aired Sting of the Scorpion/Trick or Treachery in its place.

Like this? Let us know!
Retrieved from "https://marvel.fandom.com/wiki/Spider-Man_(1967_animated_series)?oldid=6493423"
Community content is available under CC-BY-SA unless otherwise noted.