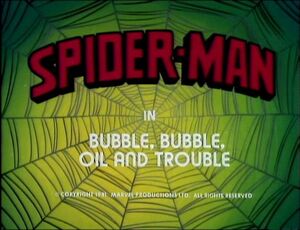 On a night patroling the city, Spider-Man encounters Doctor Octopus stealing a precious ruby from the New York Cultural Museum, but is unable to prevent him from getting away with the gem. Unfortunately, Spidey also forgets to complete his homework assignment on the landmarks of New York for his professor at college. As he attempts to find out more info about the history of New York at Empire State University's library, Spider-Man once again runs into Doc Octopus, who this time manages to steal a quartz crystal from the science lab. As the Doctor continues his crime spree by robbing a diamond exchange, Spider-Man traces him to his underground layer in the sewer system, hoping to find out Ock's plan. There, he finds that Doctor Octopus has connected all the stolen crystals to his tentacles, enhancing their powers. The ruby is used to power a laser at the end of one arm, the quartz is used as a sonic paralyzer at the end of another, and the diamonds as an invulnerable saw on a third arm. Doctor Octopus captures Spider-Man and keeps him imprisoned, while he begins his plan to steal all the oil from the ships in the harbor. Spider-Man manages to escape from Octopus' lair, and then has to stop him from stealing all the oil in New York.

Like this? Let us know!
Retrieved from "https://marvel.fandom.com/wiki/Spider-Man_(1981_animated_series)_Season_1_1?oldid=6498868"
Community content is available under CC-BY-SA unless otherwise noted.