"Revenge of the Green Goblin" 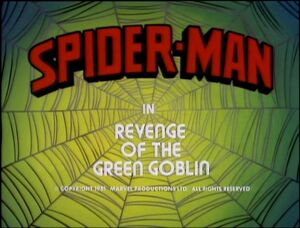 Appearing in "Revenge of the Green Goblin"

Synopsis for "Revenge of the Green Goblin"

An escaped Norman Osborn is traveling by train, when it crashes, throwing Osborn from the wreckage, and restoring his memory of being the Green Goblin. On Halloween night, Peter attends a fancy-dress college party with Betty at Empire State University. It isn'tlong before Peter senses that all is not well at the Osborn Science Building, and he goes to investigateas Spider-Man. There, he is trapped in a ‘suspendedanimation’ beam by the Green Goblin. The Goblin retrieves the memory amplifier, a device he created previously, that is capable of projecting an individual'sthoughts of the past and the future. The Goblin intendsto reveal Spider-Man's true identity to the world,starting with Betty who almost walks in on an unmasked Spider-Man. He manages to avoid being foundout by Betty, but the Goblin escapes. As revenge against Jameson for printing stories about unsafe conditions in Osborn labs, the Goblin sprays achemical compound over the presses of the DailyBugle. The next day, all the copies of the Bugle crumble into green dust. The Goblin tries to terrorize Jameson, but Spidey intervenes and saves him.Whilst still holding onto Jameson, Spidey catches onto the Goblin's gilder. With Jameson on the glider, the Goblin attempts to reveal Spider-Man's secret Identity to him. Spidey makes as much noise as he can to prevent Jameson from learning anything, but the Goblin has to be stopped before any irreparable damage is caused.

Retrieved from "https://marvel.fandom.com/wiki/Spider-Man_(1981_animated_series)_Season_1_10?oldid=5229850"
Community content is available under CC-BY-SA unless otherwise noted.