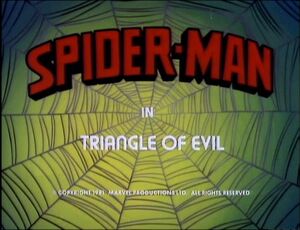 Appearing in "Triangle of Evil"

Synopsis for "Triangle of Evil"

With bills piling up for Aunt May and himself at home, Peter considers appearing on the Beyond Belief T.V. stunt show in order to win a cash prize. In the meantime, J Jonah Jameson reveals that the Daily Bugle has been sent a threatening note stating that a precious diamond and urn are going to be stolen later that night by a group calling themselves the Triangle of Evil. Spider-Man prevents the theft of both artifacts, but in the process gains even more bills to pay due to the damage caused by his fight with two of the members of the Triangle, Larry and Moe. Both thefts were organized by the leader of the group, known as the Stuntman, with the artifacts' owners, in order for them to specifically give Spider-Man large bills to pay. With so much money to pay, Peter is forced to participate in the Beyond Belief show. The Stuntman tells the director of the show that both he and Spider-Man will be taking part in the next edition. The Stuntman also reveals that he used to be a Jack Riven, the world's greatest stuntman, who was permanently fused to a mechanical suit of armor during an accident a few years ago. He blames Spider-Man for his disfigurement, and he now intends to use the T.V. show as his revenge. The show begins the next day, and Spider-Man has to compete with the Stuntman in three dangerous stunts, with the other two members of his gang cheating to ensure Spider-Man loses. Spider-Man has to win at least two out of the three stunts by just staying alive, otherwise he and his Aunt will be penniless.

Retrieved from "https://marvel.fandom.com/wiki/Spider-Man_(1981_animated_series)_Season_1_11?oldid=5229849"
Community content is available under CC-BY-SA unless otherwise noted.