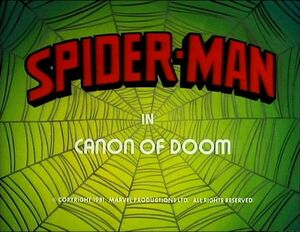 Appearing in "Canon of Doom"

Synopsis for "Canon of Doom"

In Latveria, Johan's father and others continue to be forced to work as slaves. Boris, Dr. Doom's assistant tries to convince Doom that his people should have more rights. Doom dismisses this, and has his people construct a satellite tracking station and connect it to the guidance system teleported to him by Goron, before the U.S. launches a space platform. By causing two large explosions in Greenland and the Mexican jungle, Doom creates a new fault line that crosses New York. Doom is allowed to journey to New York by invitation from Jameson, and he takes a large laser cannon with him. Doom claims that his laser will drill a hole deep into the Earth, with the resulting heat sold by Jameson from his estate. Peter goes to Jameson's mansion, and discovers that the new fault line lies directly below the estate. As Spider-Man, he then fights with Doom but is unable to prevent the first earthquakes from occurring. Back in Latveria, Johan escapes from Doom's forces with the help of Boris. While on the run, Boris tells Johan of how Doom came to power, with his father being killed by a tyrant's soldiers. Doom continued to fight injustice in Europe with his scientific knowledge until he gained a scholarship in America. There, he conducted forbidden and dangerous experiments that scarred his face. He then took refuge with a mysterious order of monks and became Dr. Doom. Doom's tale told, Boris then gives Johan the address of a Latverian resistance base in New York. With the earthquakes continuing, and an air strike on Jameson's estate imminent, Spidey must shut down Doom's laser canon.

Retrieved from "https://marvel.fandom.com/wiki/Spider-Man_(1981_animated_series)_Season_1_17?oldid=5725923"
Community content is available under CC-BY-SA unless otherwise noted.