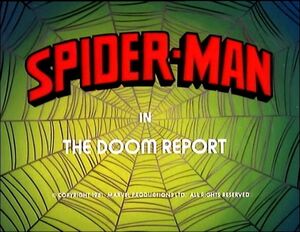 The Latverian peasant Johan has managed to escape thanks to help from Dr. Doom's assistant Boris. Doom punishes Boris by imprisoning him in his dungeon. Johan meanwhile, makes it to New York, where he meets a group of underground Latverian resistance fighters. He wishes to tell the world about the terrible conditions for the people of Latveria thanks to Doom. The resistance leader tells Johan to go specifically to the Daily Bugle, but when he gets there, his story is immediately dismissed by Jameson, who still thinks that Doom is a great man. However, Peter and Betty overhear Johan's accusations. As Betty types up the story, she is kidnapped by the freedom fighters, who are in reality working for Doom. Spider-Man shows up and rescues Betty, but the transcript of Johan's story is stolen. However, since she still has Peter's tape, the story ends up being printed by every newspaper (except the Bugle) in the city after copies are sent out. Thanks to the publicity against Doom, the revolution in Latveria begins and Johan returns to Latveria. Spider-Man decides to join him on his journey back, but Doom is remote-controlling their plane. Doom issues the U.N. with another ultimatum to make him the leader of the world or his will use his giant Tesla coils to produce torrents of rain all over the Earth. When Spidey and Johan get to Latveria after escaping from the remote-plane, they meet up with the true resistance, and Spidey sneaks into Doom's castle, while the resistance attempt to destroy the satellite tracking station. Spidey has to face Doom yet again, and save the Earth by destroying the giant Tesla coils.

Retrieved from "https://marvel.fandom.com/wiki/Spider-Man_(1981_animated_series)_Season_1_19?oldid=5725924"
Community content is available under CC-BY-SA unless otherwise noted.