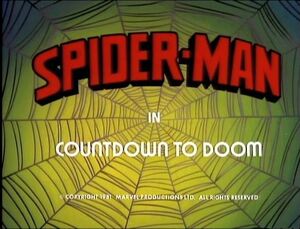 Appearing in "Countdown to Doom"

Synopsis for "Countdown to Doom"

As NASA prepares to launch a space platform containing a canon created by Dr. Doom, there is an accident with a liquid nitrogen leak, trapping some gantry workers. Spidey quickly intervenes and saves both the workers, and the rocket, little realizing that he has ensured that Dr. Doom's final master plan can go ahead. Doom watches the rocket's launch from his new castle, unaware of Johan and his comrade's escape from the dungeons. Doom takes control of the rocket using his satellite tracking station, and help from Dr. Zoltan at NASA Doom uses the laser canon on board the space platform to ignite all the volcanoes around the Pacific rim of fire. The resulting simultaneous eruptions move the Earth from its orbit, sending it away from the Sun and plunging it into a new ice age. Spider-Man discovers that the only opportunity to return the Earth to its original orbit it at midnight, when the volcanoes are on the other side of the Earth, facing away from the Sun. Doom issues his final ultimatum to the UN, and with no choice, they declare him absolute ruler of the world. Spidey meanwhile, has hitched a lift to Latveria thanks to the French ambassador, and meets up with Johan's resistance. With Doom now master of the world, he sends out robot duplicates of himself to take their place at the head of all the world's governments, and dissolves the UN. As Spider-Man and the Latverian resistance converge on Dr. Doom's castle, the stage is set for the final battle to save the Earth.

Retrieved from "https://marvel.fandom.com/wiki/Spider-Man_(1981_animated_series)_Season_1_21?oldid=5287746"
Community content is available under CC-BY-SA unless otherwise noted.