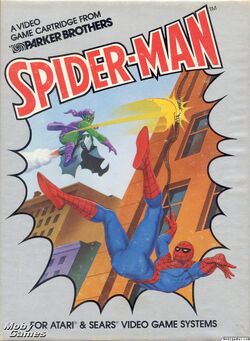 The Green Goblin's got skyscrapers boobytrapped with explosive super bombs! It's up to Spider-Man to go and defuse them!

The game involves players controlling Spider-Man as he scales a building using his web shooters in order to defuse pumpkin bombs planted by the Green Goblin. Spider-Man is only able to use his web lines to move up the building. If enemies touch him they will cut the line and send him plummeting below, however, if the the player reacts quickly enough, they can shoot another web in time to prevent themselves from falling the full distance.

Upon reaching the top of the building, Spider-Man must then face off against the Green Goblin, who has planted a "super bomb", whose fuse is activated upon defeating a certain number of enemies and/or defusing a certain number of small bombs. Once the fuse is lit, there is a limited time to reach the super bomb before it detonates and claims one of Spider-Man's lives. Upon defeating the Green Goblin (which consists of simply avoiding him) and defusing his super bomb, the game starts over at the next level, which may feature faster-moving and/or more frequent appearances of the Green Goblin, taller buildings, taller scaffold sections or a quicker-depleting supply of web fluid. The color scheme of the building also sometimes changes from level to level.

Like this? Let us know!
Retrieved from "https://marvel.fandom.com/wiki/Spider-Man_(1982_video_game)?oldid=5740580"
Community content is available under CC-BY-SA unless otherwise noted.