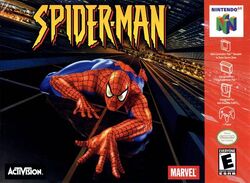 While attending a technology expo held by now-reformed Otto Octavius, our hero Peter Parker witnesses the new device stolen by...Spider-Man?! Though he tries to change into his costume, the panicked crowd offers no space to maneuver. He bumps into Eddie Brock, but Eddie is too busy getting pictures of the theft to notice his old enemy. The imposter notices the flashbulb from his camera, and quickly destroys it. As Eddie laments the loss of his chance to revitalize his career, the fake Spider-Man makes a quick exit. Overwhelmed with anger, Eddie transforms into Venom and vows vengeance. Meanwhile, two anonymous beings activate a machine which releases a strange fog into the city.

Soon after, Spider-Man heads to the First National Bank to stop a robbery in progress. The burglars in question, known as The Jade Syndicate, are in no mood for heroics, and destroy two NYPD choppers when they attempt to apprehend the thugs. After taking care of the rooftop guards, Spider-Man sneaks in, defeating thugs and freeing hostages along the way. In the vaults, the crooks activate a time bomb, forcing the wallcrawler to beat them quickly and find a place to toss the bomb. After throwing it inside a safe, where it explodes without harm, Spider-Man then leaves the bank.

Peter calls up J. Jonah Jameson to report that he's gathered photos of the robbery, but Jameson tells him to call 911, as Scorpion has returned to seek vengeance. Spider-Man races over to the Daily Bugle, battling Scorpion as Jameson hides in fear of his life. After Gargan has been defeated, Spider-Man is thanked for his efforts by Jonah calling the police on him. After a quick talk with Daredevil about his innocence, the police catch up to him.

Our friendly neighborhood Spider-Man then runs for his life with the cops in hot pursuit. They aren't pulling any punches either; using deadly force, up to and including missiles! He finally manages to lose them after they crash their helicopter into a transmitter tower. Black Cat then drops by, informing him of even bigger problems.

Not only has Rhino started a rampage at Omnitech, but Venom has kidnapped Mary Jane, taunting Spider-Man over one of the jumbotrons in Times Square. Black Cat offers to take on Rhino by herself, but Spider-Man refuses, and heads over to Omnitech with her.

As they arrive at Omnitech, however, they are too late, and another technological device is stolen by villains. Rhino manages to wound Black Cat, leaving Spider-Man to fight him alone. Despite Rhino's strength, Spider-Man takes advantage of both Rhino's low intelligence and the environment, knocking the supervillain out. The cops show up, along with Dr. Octavius, and they take Rhino into custody. Black Cat is taken away in an ambulance, trying to warn Peter that her captors aren't really paramedics, but is cut off before she can.

Then, Spider-Man asks Johnny Storm for help about where to find Venom, but after the reunion is dissolved, the symbiote finds Spider-Man and proposes him a race. It ends in a battle between the two rivals, but Venom escapes to the sewers. Spider-Man, follows him and falls into Venom's trap, a maze-like quest while also fighting Lizard-Men and solving puzzles. It all ends when Peter finds Mary Jane dangling by a chain over a large water tank. Venom appears and activates a switch, causing water to pour into the tank. Spider-Man turns off the switch and defeats Venom whilst making sure he does not drown Mary Jane. Having defeated the villain, Spider-Man angrily confronts him, and Venom states Spider-Man is the bad guy for the heist at the Science Expo. After explaining his innocence, Spider-Man and Venom reluctantly team up to uncover the imposter. Venom displays his new allegiance by saving Mary Jane from falling to her death when the chain she hangs by snaps.

Trying to get clues on the impostor, they both go to the Daily Bugle. But suddenly, Venom detects the presence of Carnage and heads off to stop him, leaving Spider-Man behind. Spider-Man discovers the Bugle to be infested with symbiotes. As Spider-Man goes deeper into the Daily Bugle, destroying several symbiote generators along the way, he soon reaches the basement. After destroying two more generators, he has an encounter with the impostor, who reveals himself to be Mysterio. After defeating and interrogating him, Mysterio tells Spider-Man about a planned symbiote invasion, and that the fog which covers the city is preparing all the citizens for symbiosis and acts as a beacon for the alien parasites. He also tells him about Warehouse 65, which is where the symbiotes are coming from.

Outside the warehouse, Spider-Man finds the Punisher, who offers to team up with him, but Spider-Man refuses, choosing to go on his own. After destroying the remaining symbiote generators, Spider-Man finds a secret passage way which leads him to an underwater base. After making his way through, Spider-Man discovers the source of where the fog is coming from, which uses Octavius's stolen device to power it. Also, he finds the Black Cat who is trapped inside an energy barrier. After managing to jam the exhaust ports, this causes a power malfunction which also frees the Black Cat.

At the end of the underwater base, Spider-Man finds the two masterminds, Doctor Octopus and Carnage. Doc Ock faked his reformation and used his device to help Carnage with the symbiote invasion, so that both could take over the World. Venom appears and fights Carnage, while Spider-Man fights Doctor Octopus. At the end of the battle, Carnage knocks out Venom and battles Spider-Man. With the help of a sonic device Doc Ock created in case Carnage tried to double-cross him, Peter subdues Cletus and removes the symbiote from him. The symbiote bonds Doctor Octopus and transforms the villain into Monster Ock. Knowing that he has no time to fight the new menace due to the base beginning to collapse, Spider-Man makes his way to the surface while being pursued by Monster Ock. At the end of the vent system, a jet a fire engulfs Monster Ock, causing the symbiote to separate from Octavius, leaving him unconscious. Finding himself in the middle of nowhere and carrying an unconscious Octavius, Spider-Man doesn't know what to do until a Quinjet arrives with Venom, Black Cat and Captain America.

The story ends with Spider-Man playing Go Fish with Captain America, Daredevil and Punisher while Human Torch and Black Cat are dancing. At the prison, Rhino, Scorpion, Mysterio and and a member of The Jade Syndicate are playing the same game. Frustrated over his failure, Doc Ock starts hitting his head on the bars of his cell.

In homage to the classic Marvel series "What If...?", this game has a "What If...?" mode that can be accessed by the password screen, introduced by the Watcher (as the original comics were). With this mode on, you can play through the game and observe the (frequently hilarious) changes that have taken place. Changes range from insignificant alterations to complete deviations from the original premise.

This game included many comic book references including:

Like this? Let us know!
Retrieved from "https://marvel.fandom.com/wiki/Spider-Man_(2000_video_game)?oldid=6462097"
Community content is available under CC-BY-SA unless otherwise noted.