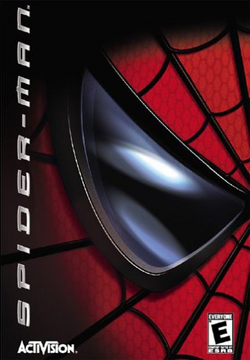 The story begins as Peter Parker develops super-spider powers after being bitten by a genetically altered spider. After competing in a wrestling match as Spider-Man, Peter is devastated when his Uncle Ben is killed by the leader of the Skulls gang Spike. Peter hunts the killer and manages to defeat him and his entire gang. Peter then vows to use his powers for good and to fight evil in Manhattan. Meanwhile, Norman Osborn and OsCorp are investigating the appearance of this new hero. Anxious to develop his Human Performance Enhancer "Super-Soldier" Serum, the main goals of which are already exhibited by the super-hero, Osborn orders the capture of Spider-Man, deploying hunter-killer robots for this purpose. Spider-Man fights these robots and emerges victorious. Meanwhile, the Shocker has just robbed a bank, and is driving away with his thugs as Spidey lands, only to be hit by Vulture. Spider-Man goes after Shocker first. His battle with Shocker leads him through Grand Central Station, into the sewers and to a subway station, where Spider-Man defeats him in a climactic battle. Afterward, Shocker tells Spider-Man about Vulture's lair: an old clocktower on the Lower East Side of town. Spider-Man climbs Vulture's tower, but Vulture escapes. Spider-Man defeats Vulture atop the Chrysler Building.

Osborn's scientists tell him that now two individuals with arachnid DNA are at large in Manhattan, and Osborn orders the capture of both. Spider-shaped robots pursue a desperate Scorpion through the sewers. Peter goes down to the subways to take pictures of his battle site with Shocker, when he runs into Scorpion. After Spider-Man helps Scorpion defeat the machines, the apparently paranoid and unhinged Scorpion turns on Spidey, and they fight. Spider-Man wins, but the Scorpion escapes. Meanwhile, Norman Osborn is fired from OsCorp and takes his own untested super-soldier serum to become the forever-feared Green Goblin. Spider-Man defeats the Goblin at the yearly OsCorp Unity Day Festival. Later, Goblin confronts Spider-Man again and is defeated, but tells Spider-Man of bombs planted downtown. Spidey races against time to defuse the bombs, and is attacked again by Green Goblin, this time with deadly small devices called razor bats.

In the Xbox and GBA versions only, Norman hires Kraven the Hunter after the bomb threat to capture Spider-Man; having lured Spider-Man in, Kraven poisons the web-slinger with a lethal gas, forcing Spider-Man to track Kraven through the zoos' corridors filled with traps before he finally confronts and defeats Kraven in a cage match in the main area of the zoo.

After studying a wing of a felled razor bat and determining that it was manufactured by OsCorp, Spider-Man goes to OsCorp to research its connection with the Goblin. He discovers that the company is producing highly dangerous chemical weapons, and shuts down the operation. After finding out that the Goblin is after Mary Jane, Spider-Man chases him down to a bridge. Here, Spider-Man has his final battle with the Green Goblin, who is impaled by his own glider. Spider-Man unmasks the Goblin to reveal Norman Osborn's face. Osborn's last words are, "Tell Harry, I'm sorry." Spider-Man replies, "I'm sorry, too." Mary Jane and Spider-Man are reunited, they kiss. Peter narrates the end of the story as the camera pans out, and he breaks the fourth wall saying "Looks like you're done here. Go outside and play."

If one defeats the game on the hard difficulty level, an option will be unlocked, allowing you to play the game again, this time as the Green Goblin (Harry Osborn).

The story follows Harry, using his father's old Goblin gear and tracking a trail of clues and loose ends left by his father to learn more on his legacy. His journey leads him into a fierce confrontation with the Hobgoblin, a mercenary hired by his father. Balancing his own personal quest for answers with a growing desire to fight crime and help those in need, Harry learns to not just duplicate his father in his evil deeds and dark ways, but to become his own Goblin. A New Goblin.

The gameplay is very similar to that of the normal game, but with many of Spider-Man's powers replaced with similar traits of the Green Goblin, including flying on a glider, throwing pumpkin bombs, and commanding razor bats.

Differences from the film

The critical reviews were good, with many critics at the time considering it the best Spider-Man game yet.[2] However, criticism fell on the indoor levels,[3] Tobey Maguire's voice acting[4] and bad camera. As well as the fact that it was too short and could be completed in 3 hours[5] Even for these flaws, this game was good enough to get an 8.4 out of 10 from IGN, a 9.3 out of 10 from GamePro, and 4 out of 5 from GameSpy.

High sales (two million copies of the PlayStation 2 version[6] and over 400,000 on the GameCube and Xbox[7]) were sold in North America alone, allowing the game to enter the "Best-Sellers" of each console (PS2's Greatest Hits, GameCube's Player's Choice and Xbox's Platinum Hits). It was recently promoted to "Best of Platinum Hits" on the Xbox.

Retrieved from "https://marvel.fandom.com/wiki/Spider-Man_(2002_video_game)?oldid=6462100"
Community content is available under CC-BY-SA unless otherwise noted.