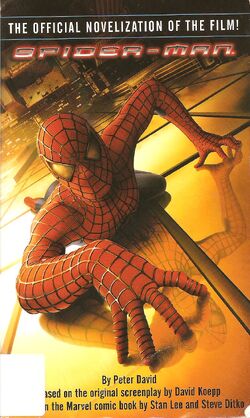 The novel starts with a prologue that takes place in an unnamed cemetery where three liquored boys, Tyler, Keith, and Daniel drive a Corvette carelessly among the graves. Suddenly, a cocoon-like structure stops the speeding car and shakes the vehicle enough to scare the pranksters away. A figure clad in red and blue with a stylized spider pattern emerges from the darkness and visits an important gravesite that the boys almost trampled.

The story flashes back to the six-year-old orphan, raised in Wisconsin, Peter Parker moving in with his Aunt May and Uncle Ben at Queens, New York after his own parents had died in an airplane crash. Uncle Ben notices a spider in Peter's new room, calling it a sign of good luck and protection. He gives his nephew a journal to communicate with his parents' spirits before they go back downstairs to enjoy Aunt May’s freshly baked cookies and milk.

Twelve years later, Peter has to chase down his bus for a Friday field trip after realizing that his neighbor and love interest, Mary Jane Watson had given him the wrong time. The bus finally slows down and Peter takes a seat in the back. Meanwhile, Peter's study partner, Harry Osborn, rides to the field trip at Columbia University in a chauffeur-driven Bentley with his father, Norman Osborn. Harry meets Peter outside the Columbia Genetic Research and they take the tour of the facility. While Peter is taking pictures for the school paper, a radioactive spider drops down from the ceiling and takes a bite of Peter's hand.

Norman Osborn spends the rest of the evening at the Ascot Club talking with J. Jonah Jameson, publisher of the Daily Bugle and visits the Research and Development Department of his company, OsCorp Industries in Commack, Long Island. He meets his board of directors who threaten to shut down the department if the Human Performance Enhancers continue to return negative results on the lab mice. Norman ignores his assistant Dr. Mendell Stromm’s warnings against using the Performance Enhancers on himself. Halfway through the experiment, the chemicals turn Norman crazy to the point where he kills Dr. Stromm and steals the OsCorp prototype glider.

Peter arrives home not feeling so well, convinced that the spider has poisoned him. When he wakes up for school the next morning, he feels much better to the extent that he no longer needs to wear glasses. Once again, he misses the bus, but this time he easier to reach than last time and pounds on the bus’s side until he notices that the “Go Packers!” banner is sticking to his fingers like flypaper. Despite his large breakfast, Peter finds he still has a monstrous appetite and loads his tray during lunch, and that his wrists had grown some type of spider spinnerets. He accidentally shoots a web and catapults Liz Allen’s tray onto the face of the school bully, Flash Thompson. Lunch soon gets out and Flash plots his revenge by staging a fight with Peter in the hall. Peter finds he has also developed a precognitive ability to sense danger and easily defeats the bully.

After school, Peter experiments with his new powers and finds that he can climb walls, jump from building to building, spin webs, and sense danger before it happens. Eager to cash in on these abilities, he signs up for the New York Wrestling League and designs a stylized spider costume for the event. On the day of the tournament, Peter prepares to make a break for it with the excuse of going to the library. Uncle Ben however insists on driving his nephew and warns Peter that "with great power, comes responsibility." Ben drives back home to watch the exact same wrestling match in which Peter happens to be fighting and beats the opponent, Bone Saw McGraw. The promoter only gives Peter $100 out of the advertized $3,000 because he pinned Bone Saw in two minutes instead of three. A robber takes most of the promoter’s cash and Peter lets the thief escape as payback for the $2,900 he never got.

By the spot Uncle Ben had told his nephew to meet him at, Peter finds a group of policemen and an ambulance investigating the death of his uncle. The police pursue his uncle's killer and Peter follows them in his “Spider-Man” costume. The carjacker hides in a warehouse and Peter finds that he is the same man who he let escape with the promoter's money. Meanwhile, General Slocum investigates OsCorp's competition, Quest Aerospace, with their Ballistic All Defense Guerilla Explorer/Recon (B.A.D.G.E.R.). Norman’s alter-ego from the Performance Enhancer experiment uses his stolen gilder to attack the prototype equipment and destroy the bunker holding Slocum and Dr. Maddox.

Mary Jane breaks up with Flash on Graduation Day and replaces him with the much more understanding Harry Osborn. Peter moves in with Harry before college and he fashions a better spider outfit based on his wrestling costume to wear while he fights crime. He becomes known as "Spider-Man" and finds a job as a freelance photographer for the Daily Bugle. During the World Unity Festival, the OsCorp board members tell Norman that they have decided to sell OsCorp. Outraged at this injustice, Norman’s alter-ego once again takes power and dons a goblin mask and rides the glider back to the festival to attack the board members with a pumpkin bomb. Spider-Man stops the costumed mad man from wreaking more havoc at the festival.

The newspapers dub the new criminal the "Green Goblin" who gives Spider-Man the chance to form an alliance with him. The Green Goblin disguises himself as a helpless lady and sets a building on fire to attract Spider-Man, who declines the Goblin's alliance request and gets rewarded by a cascade of weaponry which leaves a deep gash on his arm. Spider-Man swings back home for Thanksgiving dinner with the Osborn's and Norman recognizes the wound on Peter’s arm as the one he gave to Spider-Man and makes the connection between the two. The Green Goblin starts targeting Peter’s loved ones, starting with Aunt May and then taking Mary Jane. hostage. He gives Spider-Man a test between saving M.J. or a cable car full of innocent bystanders although Spider-Man manages to capture both. Spider-Man corners the Green Goblin and he takes off goblin mask to earn sympathy from Spider-Man while he slowly maneuvers the Goblin Glider behind Spider-Man to attack the hero. However, Spider-Man jumps out of the line of fire and Norman gets the full blast of the glider's wrath. Spider-Man takes Norman's body back to the Osborn mansion and Harry blames him for his father’s death.

Retrieved from "https://marvel.fandom.com/wiki/Spider-Man_(novel)?oldid=6547520"
Community content is available under CC-BY-SA unless otherwise noted.