Appearing in "The Man Called Electro!"

This story is a reprint of the comic
Amazing Spider-Man #9.

Synopsis for "The Man Called Electro!"

This story is a reprint of the comic
Amazing Spider-Man #9.

Spider-Man is dashing past a group of pedestrians who are wondering where he is off to. Then the police are happy to see Spider-Man swinging by to help them stop gunmen, but he just swings by. Soon we find out the reason for Spider-Man rushing by was to get a prescription for Aunt May. On the other side of town, while Peter sits up at Aunt May's bedside, a new menace in the form of Electro charges himself up with electricity and sets out to steal the contents of an armored car carrying gold. After using electric shocks to scare the guards and surrounding them in a ring of electricity he manages to get what he wants.

The next morning, Peter calls the doctor and he explains that Aunt May's health is worse and that she must go to the hospital. Aunt May is worried that Peter cannot look after himself, but he assures her he can. Later that day, Peter goes to class but ignores the taunts of Flash Thompson as his mind is focused on the well being of Aunt May. When Peter finally visits Aunt May, he finds Betty Brant there visiting. Peter has much on his mind and leaves abruptly, without seeing Betty home.

Meanwhile, Electro decides to make a withdrawal at the Forest Hills Bank. There he uses electric shocks to keep the bank manager and his guest J. Jonah Jameson busy while he opens the timelock vault with his electrical powers. The next edition of the Daily Bugle is printed and there is an article claiming the criminal Electro is Spider-Man. Spider-Man searches for Electro and comes up empty a few times, and when he finally finds him, Electro defeats him. The next edition of the Bugle again claims to have proof that Spider-Man is Electro, which makes the public ask questions about who Spider-Man really is.

At a secret hideout after also reading the Bugle, Max Dillon tells his origin. When he's finished, he goes to the West Side House of Detention in downtown New York, where he sets about freeing some prisoners to become his flunkies. Jameson travels down there to see if Spider-Man shows up and to prove that they are one and the same. Peter is tied up looking after his aunt at the hospital, but wants to go to the House of Detention to take photos for the Bugle. When Spider-Man finally turns up at the House of Detention, Jameson realizes his mistake: Electro and Spider-Man are different people.

Spider-Man quickly puts rubber gloves on his hands and rubber boots on his feet to insulate him from the electric bolts he will face when he finds Electro. After a long fight with the inmates and Electro, Spider-Man finally defeats Electro with a fire hose and removes his mask, expecting to know who Electro is.

Afterwards Spider-Man sells pictures of Electro fighting Spider-Man to J. Jonah Jameson, receiving some much needed money to help Aunt May. The story ends with Betty and Peter trying to find the right words to say to each other. 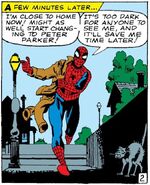 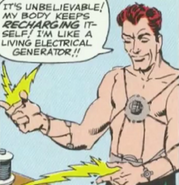 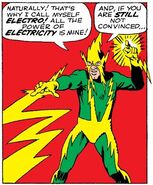 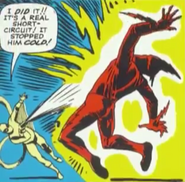 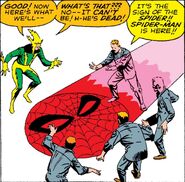 Appearing in "Thor the Mighty and the Stone Men from Saturn!"

This story is a reprint of the comic
Journey into Mystery #83.

Synopsis for "Thor the Mighty and the Stone Men from Saturn!"

This story is a reprint of the comic
Journey into Mystery #83.

Donald Blake, a doctor from the United States, is visiting Norway. At the same time, a ship from Saturn lands nearby as advance scouts for a planned invasion. A local fisherman spots them and alerts the villagers, but they dismiss him. Blake overhears and goes to look for himself. When he steps on a twig, the aliens notice him. He flees into the hills, where he loses his cane. He runs into a cave, but the other entrance is blocked by a giant boulder. A secret door opens, revealing a chamber where Blake finds a walking stick. He tries to move the boulder with the stick but is unable to get leverage. Frustrated, he hits the boulder with the stick, and, in a flash of light, the stick transforms into a hammer, transforming Blake into Thor, the mythical Norse God of Thunder.

Thor easily lifts the boulder and leaves the cave. He verifies that the hammer has all the powers of Mjolnir, Thor's legendary weapon. He discovers it gives him the power to create storms and that the hammer is indestructible and will come back to him if thrown. Meanwhile, the alien armada shows up on Earth's radar screens. When fighter jets scramble to meet them, they project an image of a huge dragon and frighten away the pilots. When the ground forces fire missiles, they explode harmlessly against the ships' force fields. Thor speeds to the defense of the Earth.

Part 3: Thor the Mighty Strikes Back!

When Thor attacks the aliens, they drop a cage over him, but he tears the bars open. They aim their disintegration beams at him, but his hammer smashes their guns. They unleash their Mechano-Monster, but he smashes it to bits. The aliens return to their ships and give up their invasion. Thor changes back to Dr. Blake, whom the soldiers ignore when they come to look for the invaders.

Retrieved from "https://marvel.fandom.com/wiki/Spider-Man_Comics_Weekly_Vol_1_1?oldid=5201383"
Community content is available under CC-BY-SA unless otherwise noted.