Beneath the photos... the letters... you'll find what you need.

At the funeral of Mary Jane, Peter grieves for his wife, while his son Ben tries to comfort him. Peter then thinks of what type of hero he is.

After 12 years, Ben, who now lives with Aunt May, prepares to go to high school, where he confronts some bully over another student and gets in trouble. Peter, who had given up the mantle of Spider-Man and is working full time as reporter on assignment, is called by the principal between his flights. After a discussion between Peter and his son, Ben walks home without him.

Somewhere else, Cadaverous is plotting his next plan alongside a woman in containment unit; meanwhile, Ben meets a girl named Faye Ito in detention and the two talk for a bit. At the same time Peter is busy taking a flight and talks to his Aunt May about Ben. After their discussion, Peter hangs up as the plane is ready for takeoff.

That night, Ben stands in a floor of blood as he witnesses his mother. As the blood covers Ben, he cries to his mother for help. He then wakes up from the nightmare only to find himself on the ceiling. Recovering himself, Ben discovers his father's equipment after Aunt May tells her grandnephew to take a look in the attic.

The most shocking and incredible comic of 2019 is here as J.J. ABRAMS (STAR WARS, STAR TREK, SUPER 8) and his son HENRY ABRAMS are joined by superstar artist SARA PICHELLI (MILES MORALES, GUARDIANS OF THE GALAXY) team up for SPIDER-MAN! What do they have planned for Peter Parker and Mary Jane Watson?! Who is Cadaverous?! The Modern Master of Mystery Makes His Marvel this September! 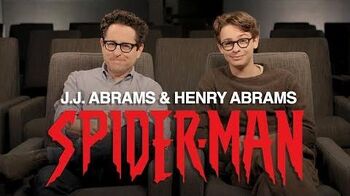 Retrieved from "https://marvel.fandom.com/wiki/Spider-Man_Vol_3_1?oldid=6090729"
Community content is available under CC-BY-SA unless otherwise noted.