"Triumph of the Green Goblin" 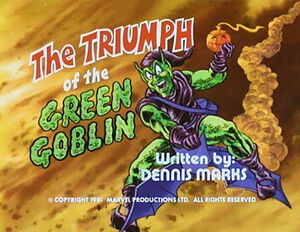 Writers
Dennis Marks
Previous Episode
Next Episode
—
"The Crime Of All Centuries"
(September 19, 1981)

Appearing in "Triumph of the Green Goblin"

Synopsis for "Triumph of the Green Goblin"

As the gang heads to a costume superhero party on the Empire State University campus, Norman Osborn's plane crashes reverting him into the Green Goblin. The Goblin's newest scheme is to take the formula that changed him and put it in to the reservoir to turn all of New York into Goblin-like creatures that will follow his rule. The problem is he can not find it. So he kidnaps his niece, Mona Osborn, in hopes that she will know where the formula is. Spidey comes to the rescue, but does not stop the Goblin from putting the formula into the reservoir. They fight high above the city on the Goblin's glider as Iceman freezes the reservoir before the formula mixes in. Firestar burns through the frozen water to cut the formula out. As Spidey and the Goblin continue their battle, the Goblin accidentally hits some electric wires which causes an explosion and reverts him back to Norman Osborn.

Retrieved from "https://marvel.fandom.com/wiki/Spider-Man_and_His_Amazing_Friends_Season_1_1?oldid=5224697"
Community content is available under CC-BY-SA unless otherwise noted.