"Pawns of the Kingpin" 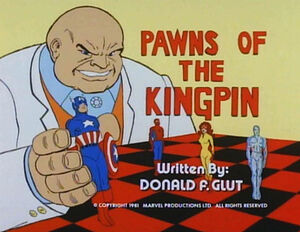 Episode Title
"Pawns of the Kingpin"

Appearing in "Pawns of the Kingpin"

Synopsis for "Pawns of the Kingpin"

The Kingpin devises a diabolical scheme to steal a unique military weapon known as the Omni-Blaster. It is so powerful that should he acquire possession of it, no Superhero on earth would be able to stop his ensuing crime spree. He and Dr. Faustus demonstrate a small device known as the ‘Psycho Disc.’ The disc, when placed on the back of someone’s neck, allows the person's mind to be controlled for a maximum of twelve hours. The Kingpin uses the device on an unsuspecting Captain America, the only man able to infiltrate the military compound where the Omni- Blaster is stored. The brain washed Superhero enlists the help of Iceman by telling him he is needed on an important government mission. Spider-Man and Firestar, already suspicious of Cap's intentions, follow to the military post where they witness the theft in progress. Iceman, having used his powers to freeze and crack open the vault containing the weapon, attacks Spider-Man and Firestar, believing them to be dangerous androids. He and Captain America then deliver the weapon to the Kingpin. Moments later the Psycho Disc controlling Captain America’s mind disintegrates and both heroes fully realize what has happened. The pair, with the aid of Spidey and Firestar, attempt to apprehend the Kingpin and his co- conspirators. Spidey follows the crook onto an airplane, where in his haste, the Kingpin pushes the Omni- Blaster's self destruct button. The weapon explodes, leaving Spidey able to bring the villain to justice.

Retrieved from "https://marvel.fandom.com/wiki/Spider-Man_and_His_Amazing_Friends_Season_1_12?oldid=5224565"
Community content is available under CC-BY-SA unless otherwise noted.