"The Crime Of All Centuries" 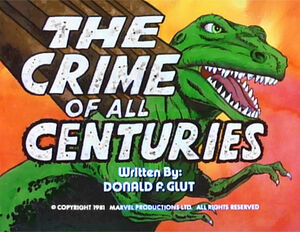 Episode Title
"The Crime Of All Centuries"

Appearing in "The Crime Of All Centuries"

Synopsis for "The Crime Of All Centuries"

Kraven the Hunter is in New York to unveil his recently captured prehistoric animals. While at the Natural History museum where the presentation is taking place, the dinosaurs escape and as the Spider- Friends attempt to recapture them, Kraven’s real motive is revealed. The villain is planning to seize control of New York by hatching a dinosaur army under his command. In order to succeed, Kraven steals the Eye of India, a precious ruby on display in the museum, and captures Firestar. Only her power alone, combined with the ruby can fuel his Growth Energizer, a machine that will turn his unhatched dinosaur eggs into an unstoppable dinosaur army. Spidey and Iceman manage to locate Kraven’s lair where Firestar is being held prisoner, but the duo are swiftly captured themselves, forcing Firestar to do Kraven’s bidding. A dinosaur egg is transformed into an enormous Tyrannosaurus Rex. Luckily the team manages to break free and lures the dinosaur into a tar pit. Firestar uses the growth energizer to revert the creature’s size and Kraven is handed over to the police.

Retrieved from "https://marvel.fandom.com/wiki/Spider-Man_and_His_Amazing_Friends_Season_1_2?oldid=5242136"
Community content is available under CC-BY-SA unless otherwise noted.