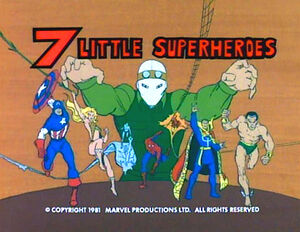 A mysterious stranger invites the Spider-Friends for a weekend retreat to Wolf Island. At Aunt May's request they take Ms Lion along with them. On arrival at the island’s mansion, the trio discover that four other superheroes were also invited: The Sub-Mariner, Shanna the She-Devil, Captain America and Doctor Strange. The mystery surrounding the absence of their host is soon solved when a sinister voice threatens the group with their ultimate destruction. The gathered heroes attempt to escape, only to discover that a force field has been placed around the island. Having recognized the voice to be that of the Chameleon, a mutual enemy, who possess the ability to alter his appearance to match that of anyone he chooses, the group reaches an unnerving conclusion; the villain could pose as any one of them at any time. Unable to know whom to trust, they separate and begin to search the island. The Chameleon, using an elaborate array of traps, targets the heroes one by one. The uncaptured members eventually re-group and soon discover that they have an unexpected advantage; Ms Lion's keen sense of smell reveals the Chameleon each time he attempts to impersonate one of them. Although hindered, the villain succeeds in keeping one step ahead until all the heroes have been trapped. Spider-Man manages to escape, and discovers that the island has been rigged to explode. With only seconds to spare he rescues his friends and then apprehends the Chameleon. All escape thanks to the help of Ms. Lion, who is affectionately deemed the eighth little superhero.

This episode was made into the Spiderdub episode "Responsible Riddles".

Retrieved from "https://marvel.fandom.com/wiki/Spider-Man_and_His_Amazing_Friends_Season_1_6?oldid=5224691"
Community content is available under CC-BY-SA unless otherwise noted.