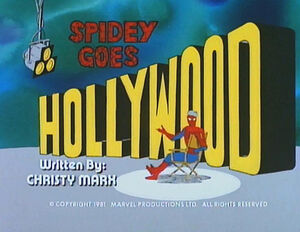 Mysterio blackmails bigwig Hollywood producer, Stan Blockbuster, into hiring Spider-Man to make a movie. Though Peter is reluctant to do it, his Aunt May needs money for the house payment, so the Spider-Friends are off to Hollywood! On the trip, their bus gets stopped because the Incredible Hulk has been sighted in the area, but they soon get on their way as they pick up a new passenger. Spidey begins to shoot his mouth off and promises the passenger, a nice gent named Bruce Banner, a job on the set of his movie. As production on the film begins, one mishap after another occurs, endangering Spider-Man, Iceman, and Firestar's lives, and Banner begins to get suspicious of Blockbuster's motives. During the final filming sequence with a mechanical Hulk, it looks as though Spidey is in for it, but Banner loses control and turns into the real Hulk. The two Hulks fight to the finish as Mysterio is revealed as the instigator behind all the film's problems. And though the film is not completed, Spidey still receives his paycheck, saving Aunt May's house. "Hooray for Hollywood!!"

Retrieved from "https://marvel.fandom.com/wiki/Spider-Man_and_His_Amazing_Friends_Season_1_9?oldid=5518387"
Community content is available under CC-BY-SA unless otherwise noted.