"The Origin of the Iceman" 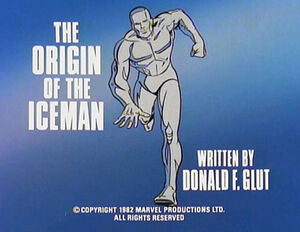 Appearing in "The Origin of the Iceman"

Synopsis for "The Origin of the Iceman"

During a rescue attempt to put out a blazing building, Iceman discovers that he is losing his powers. The gang goes to the E.S.U. science lab to use a memory probe to find out why. Iceman's life is witnessed by Peter and Angelica and they watch him as he first develops his powers, when he joined the X-Men, and how he met Spidey, but nothing leads to an answer of why he is losing his powers. As the Spider-Friends travel through the city, they find that Videoman is on the loose again. The villain has been draining the city's electrical power. A battle ensues, Iceman completely loses his power and all of a sudden Firestar seems to be losing hers. Videoman escapes and captures J. Jonah Jameson, trapping him inside a Videoman arcade game. Spidey and Firestar search for Videoman as Bobby tries to locate Jameson with the gang's super crime lab. Spidey figures out that Videoman is responsible for the two mutants' loss of powers, in that he must be draining the electrical energy from their brain waves. So Bobby allows himself to be 'zapped' by Videoman to see if he can get his powers back, but instead he ends up trapped in the computer with Jameson. Videoman creates two more arcade creatures that end up turning on him and the three destroy each other. Jameson is free and Bobby and Angelica's powers are returned.

Like this? Let us know!
Retrieved from "https://marvel.fandom.com/wiki/Spider-Man_and_His_Amazing_Friends_Season_2_1?oldid=6498907"
Community content is available under CC-BY-SA unless otherwise noted.