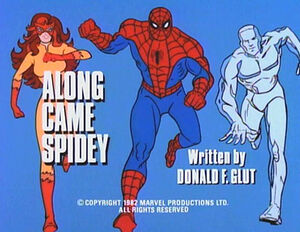 Appearing in "Along Came Spidey"

Synopsis for "Along Came Spidey"

As Spider-Man tries to stop the Shocker from escaping an attempted robbery, Aunt May gets harmed in the effort. That night while May is in the hospital, Peter tells Bobby and Angelica how he feels responsible for the accident because Aunt May (who thinks Spider-Man is bad) was fleeing from him. He thinks he should give up being Spider-Man. But when asked why he became Spider-Man in the first place, Peter reaffirms his original principle for becoming a crime-fighter. So the Spider-Friends set out to stop the Shocker's crime spree. The villain seems unstoppable until Spidey realizes that the Shocker's power comes from his costume. The Spider-Friends destroy the costume and Spider-Man ends up saving the day, even in the opinion of Aunt May.

Retrieved from "https://marvel.fandom.com/wiki/Spider-Man_and_His_Amazing_Friends_Season_2_2?oldid=5224610"
Community content is available under CC-BY-SA unless otherwise noted.