"The Education of a Superhero" 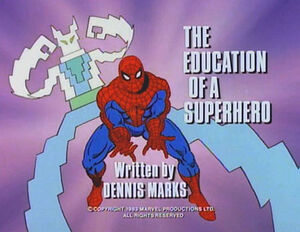 Appearing in "The Education of a Superhero"

Synopsis for "The Education of a Superhero"

The evil Gamesman has a plan to hypnotize all the young people and wreak havoc upon the city. He transmits an hypnotic signal via arcade games using his ‘hypno-sound machine.’ Meanwhile Francis Byte, a teenage video game prodigy, is doing so well on one particular game that it explodes. This results in him transforming into the new superhero VIDEOMAN. The hypnotized teenagers gather in Central Park where both the Spider-Friends and the very inexperienced Videoman attempt to foil the Gamesman's scheme. The villian captures Louise, a girl whom Francis is fond of. In exchange for her release Videoman agrees to take control of a satellite that will give the Gamesman power to hypnotize the world. Fortunately the Spider- Friends defeat the villain before Videoman's mistake can be taken advantage of. Francis is taken to Professor Xavier’s school for proper superhero training.

Producer Dennis Marks really pushed the Videoman character throughout this series with this episode being the character's third appearance. Yet in this episode, The Spider-Friends react as though this is the first time they have ever seen him. With the video game craze of the 1980's, Marvel may have thought the character had more potential as a hero instead of a villain. This episode set up Videoman's introduction into the X-Men for their own series.

Like this? Let us know!
Retrieved from "https://marvel.fandom.com/wiki/Spider-Man_and_His_Amazing_Friends_Season_3_3?oldid=6498912"
Community content is available under CC-BY-SA unless otherwise noted.