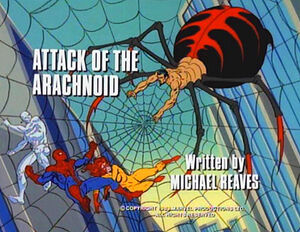 Spider-Man and His Amazing Friends Season 3 Episode 4
Release Date
October 8, 1983
Directors
Don Jurwich
Writers
Michael Reaves
Previous and Next Episodes
Previous
Next
"The Education of a Superhero"
(October 1, 1983)
"The Origin of the Spider-Friends"
(October 15, 1983)

Appearing in "Attack Of The Anachnoid"

Synopsis for "Attack Of The Anachnoid"

While the Spider-Friends stop the Scorpion from stealing a canister of Z99, which would turn anyone into a super-villian, a chemical scientist named Zoltan creates a spider-serum that will give him the equivalent of Spider-Man's powers. Zoltan begins impersonating Spider-Man to commit crimes, leaving Spidey with all the blame. The police arrest Spidey and put him in a maximum security prison in a cell right beside the Scorpion. After fearing that Spidey may have been exposed to the Z99, Iceman and Firestar discover that Zoltan is committing the crimes, just as his serum mutates him into the Arachnoid, a creature half-human, half spider. Looking for revenge, the Scorpion breaks into Spider-Man's cell eventually breaking them both out of prison. The cops capture them both but Spider-Man's lawyer, Matt Murdock, hands them a court order that says Spidey is to go free. The Spider-Friends, now in full force, acquire an antidote for the Arachnoid, who is presently wreaking havoc on New York City. Spider-Man uses his spider sense, which is on the same frequency as the Arachnoids, to distract him as he hits him with the antidote, changing him back into a powerless Zoltan.

Like this? Let us know!
Retrieved from "https://marvel.fandom.com/wiki/Spider-Man_and_His_Amazing_Friends_Season_3_4?oldid=6498913"
Community content is available under CC-BY-SA unless otherwise noted.