"Spidey Meets the Girl from Tomorrow" 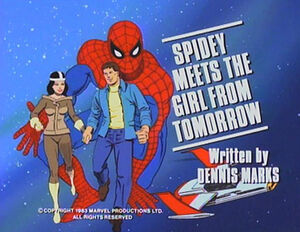 Appearing in "Spidey Meets the Girl from Tomorrow"

Synopsis for "Spidey Meets the Girl from Tomorrow"

Brother and sister, Bartow and Ariel, accidentally rip the time field in the future and crash land on present day Earth. Peter and Ariel share an instant attraction, and she and Bartow explain what has happened. Doctor Octopus, who is lurking nearby, decides he must possess the ship as it has the ability to travel through time. In order to repair the space craft, the siblings and the Spider-Friends leave to gather together the necessary components. But when they return, they discover that the ship has been stolen. Even worse, Ariel and Bartow soon fall ill as Doctor Octopus arrives demanding the components and kidnapping the weakened Bartow. While searching for him, the Spider-Friends discover that the sibling’s blood contains no white blood cells, therefore they have no natural immunity against Earth’s germs and will soon die unless returned to their own time period. The team manages to defeat Octopus and repair the space craft, but Peter is faced with a dilemma when it comes time for his new love to leave. He makes the decision to go with her, and travels with the siblings back to their time period. Upon their return however, Ariel and Bartow’s father explains that Peter carries Earth’s germs and that if he were to stay, he would have to be placed in immediate quarantine. He and Ariel would never be able to see each other again. After an emotional farewell, they teleport him back to Earth, leaving the broken-hearted Peter only Ariel’s necklace to remember her by.

Like this? Let us know!
Retrieved from "https://marvel.fandom.com/wiki/Spider-Man_and_His_Amazing_Friends_Season_3_6?oldid=6498915"
Community content is available under CC-BY-SA unless otherwise noted.