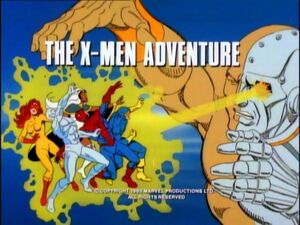 Appearing in "The X-Men Adventure"

Synopsis for "The X-Men Adventure"

As the Spider-Friends try out the X-men's Danger room, an intruder invades their mansion and traps everyone by taking control of the computer system. Firestar realizes that the intruder is a man from her past. Nathan Price, a former lover that blames her for his condition. He is a schizophrenic half-man, half-machine now calling himself Cyberiad. The entire group breaks up into teams in hopes to reach Cyberiad in the attic before he causes a meltdown. After many traps, the uncaptured members make it to the top floor, but the only way to the attic is through the MAZE OF MADNESS, an unpredictable room of holograms and traps. Only Firestar makes it through the maze without being captured and has to face Cyberiad one-on-one. She fuses his circuits, defeating him and surfacing the Nathan Price side of his persona before finally passing away.

Retrieved from "https://marvel.fandom.com/wiki/Spider-Man_and_His_Amazing_Friends_Season_3_7?oldid=5224398"
Community content is available under CC-BY-SA unless otherwise noted.