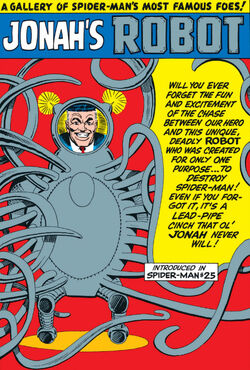 This was the first Spider-Slayer robot created by Spencer Smythe. Smythe convinced J. Jonah Jameson to use it as the ultimate tool to capture and defeat Spider-Man and to hopefully reveal his true identity. It was built to track anything with spider DNA, and was armed with unbreakable coils that would overwhelm and restrict an opponent. It also had a two way audio/video monitor showing the image of whoever controlled it on the robot's "face"[1].

Retrieved from "https://marvel.fandom.com/wiki/Spider-Slayer_Mark_I?oldid=5464131"
Community content is available under CC-BY-SA unless otherwise noted.