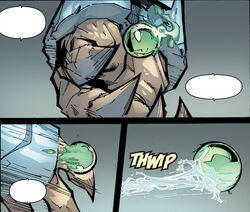 After being kissed by Adriana Soria; Peter Parker underwent a metamorphosis into a giant spider before molting into a restored human form with augmented spider powers.[1][2] Several years later, Adriana Soria approached Miles Warren and presented him with a tissue sample of Peter Parker's molted spider body.[3] Using this tissue sample, the Jackal engineered a virus that mutated those infected into Homo arachnus.[4]

Initially the virus was spread by genetically-engineered bedbugs, though it later mutated into a highly contagious airborne form. The only beings unaffected by the virus were various superheroes, though in an alternate universe the virus mutated further to enable the infection of superpowered beings.[7]

The first stage of the Spider-Virus bestowed the infected individuals with powers identical to those possessed by Spider-Man after his first encounter with the Queen.

The third stage of the Spider-Virus either transforms the infected individuals into giant spiders or humanoid spider-monsters. The metamorphosed individuals are under the control of the Queen, who is able to control them in the same manner as Homo insectus.

Notably, Anya Corazon, possibly due to being a totemic avatar of the Web of Life and Destiny, kept the powers bestowed by the virus's initial stage even after being exposed to the cure.

The only known cures for the Spider-Virus are the antibodies produced by the Anti-Venom symbiote,[6] and being mutated by substances like the Goblin Formula; Connors Formula; Godstone, and Michael Morbius's pseudo-vampire serum.[8]

Jack Russell was infected while in human form, but could cause the virus to go into temporary remission by transforming into Werewolf by Night. This was presumably due to the mystical nature of Russell's shapeshifting, as no level of immunity was observable in the Hulk (though it's possible that Bruce Banner, who the Hulk was never shown turning back into, was the uninfected half of their being).[7]

Like this? Let us know!
Retrieved from "https://marvel.fandom.com/wiki/Spider-Virus?oldid=6436692"
Community content is available under CC-BY-SA unless otherwise noted.