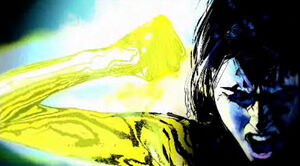 Congratulations, Wolverine. You are no longer the most screwed-over human in the history of the entire world.

Jessica Drew is in England, despairing over her lot in life and how her entire life has been screwed up by the entire Skrull invasion. She has a note slipped under her door to go to a meeting. She gets on a bus and is met by Abigail Brand, who recruits her into S.W.O.R.D., giving her a touch phone, that has an uplink to S.W.O.R.D. as well as a detector that reads anyone that does not register as human. Jessica first goes to Madripoor, and is in her hotel room when Spider-Man comes crashing through her window. He tells her that the Avengers are in Madripoor with him, all looking for her. He tells her that S.W.O.R.D. has been infiltrated and she needs to go with him now. She attacks him, both falling out of a window, five stories down. She lands on him and begins pounding his face until he loses consciousness, and reverts to his Skrull form. Jessica then passes out.

Retrieved from "https://marvel.fandom.com/wiki/Spider-Woman:_Agent_of_S.W.O.R.D._Season_1_1?oldid=4122227"
Community content is available under CC-BY-SA unless otherwise noted.