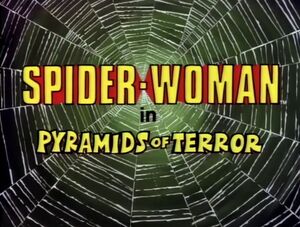 You were expecting maybe the Hulk?

Appearing in "Pyramids of Terror"

Synopsis for "Pyramids of Terror"

Spider-Man witnesses a pyramid appearing out of nowhere in Egypt. While investigating the wild occurrence, he is captured by a mummy. Around the world, Jake Hunt is shooting Jessica Drew in a museum next to another mummy for the next Justice Magazine cover. Her Spider-Sense warns her of danger as the nearby mummy comes to life!

Hunt tries to play hero, but winds up falling out the window, which allows Drew to quick-change into Spider-Woman! She saves her photographer, stops the threat, covers for her alter ego, and soon flies off to Egypt under the auspices of covering the story for the magazine thanks to some help from her precocious nephew Billy. Upon arrival, they are warned about the new pyramid, but keep up the investigation. Feigning "urgent business," Drew goes off to change into Spider-Woman so she can take on an army of mummies. Back at the newly risen pyramid, Spider-Man's captor explains that he's actually an alien planted there ages ago with the mission of colonizing Earth.

Having captured Spider-Woman as well as her companions, the mummy in charge commands his minions to hop into their pyramid ships and start mummifying Earth's population! After utilizing some nearby sand spiders, Drew manages to free the fellas. During the climactic battle, Spider-Woman used her smarts — along with some help from Spider-Man — to stop the invasion by using geometry!

Like this? Let us know!
Retrieved from "https://marvel.fandom.com/wiki/Spider-Woman_(animated_series)_Season_1_1?oldid=7118320"
Community content is available under CC-BY-SA unless otherwise noted.