You're always a hero, Jess. You're our hero.

Jess takes a bodyguard assignment for Michael Marchand, a billionaire in big pharma, to safeguard his daughter Rebecca's 16th birthday. However, as she watches over the teens having fun, Jess notes how physically unwell she feels and worries she may be sick. After shortly starting the festivities, mercenaries raid the yacht seeking to kidnap Rebecca, but Jess fights them off in a berserker manner. While noting her own shift in behavior, Jess continues fighting the men, and her methodology frightens some of them to flee finding the effort not worth it. When a rude boy in a Deadpool cosplay insults Jess, she throws him in the water with a lifesaver. When the leader of the group find Rebecca, she goes willingly and inconveniences them as they didn't know she was a paraplegic, and her chastising them for not knowing them distracts them long enough for Jess to throw an anchor at their helicopter to sink it. With the leader not looking at her, she brings out the boy dressed as Deadpool to throw at the mercenary leader and subdues him. After the threat passes and everyone is safe again, Michael approaches Jess in concern for her well-being. Jess pukes venom and has a seizure, asking the others to call for her a nurse.

Appearing in "New Costume, Who Dis?"

Synopsis for "New Costume, Who Dis?"

Two Weeks Earlier: After a mission with Strikeforce, a broke Jess gets a lend for a partial taxi ride to her apartment, finding Gerry having gone through all his diapers and having trashed the interior enough to lose the deposit. As she contemplates getting another job to pay for the extra costs, Roger optimistically points out she got a request from a rich client, and Jess agrees to it. Jess goes to Big Ronnie when needing a new "work for hire suit," and is sold on the new weave. After staring a payment plan with Big Ronnie, the seamstress is called by an unidentified benefactor and relays that she did as they paid. As Ronnie wants to reuse the fabric, the benefactor informs her that it is exclusively made for ONE person in mind- notably Jess, as her vitals are being read with real time telemetry from an undisclosed location.

SPIDER-WOMAN IS BACK, AND PULLING NO PUNCHES!

Jessica Drew hasn’t been feeling like herself lately (she’s not a Skrull, we promise). When the angry, irritable, and unwell Spider-Woman takes a simple security gig to help get back on her feet, she finds herself besieged by unknown forces out to destroy everything around her. What’s wrong with Jessica? Just how DID she get this job? And who are these violent lunatics who keep trying to blow her up? WHO CARES? Does Spider-Woman have someone to punch? THAT’S ALL THAT MATTERS.

An explosive new series that pushes Spider-Woman into new heights of action and adventure from the mad minds of Karla Pacheco and Pere Pérez, this is the Spider-Woman book you’ve been waiting for! 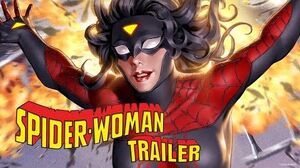 As the first story in Jess' arc to find a cure, the first sign of this is in her eyes which become a shade of deep blue-green, as her normal color is a vibrant green.